Theatre Review: ‘Exploring the Artistry of the Male Dancer’ at the Theatre Project 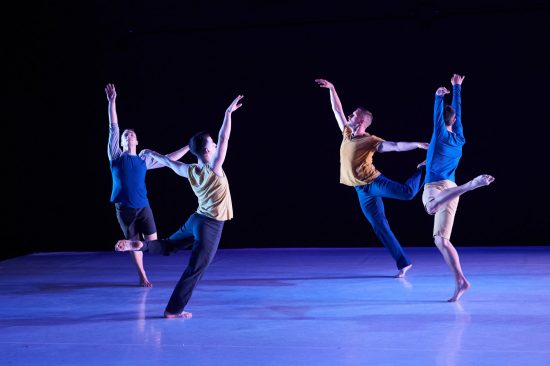 When I first saw the term “10 Hairy Legs” I thought we were talking about a mutant spider. Then I learned it is the name of an all-male, New Jersey-based repertory American modern dance company that is in the midst of a 10-state national tour with an all-too-brief stop at the Theatre Project in Baltimore.

Enchanted by the Winter Olympics figure skating competition in the days leading up to the performance reviewed, I envisioned that 10 Hairy Legs (10HL) would be a natural extension of the artistry, gracefulness, poise, power and creativity displayed by Olympics skaters.

While the stage floor of the Theatre Project is not ice and the five good-looking, physically fit young dancers perform in bare feet as opposed to skates, the snowy, frosty night of 10HL’s Baltimore debut felt like it could have been Pyeongchang.

First-rate choreographers David Parker, Megan Williams, Hedi Lansky, Stephen Petronio and Doug Elkins are ingenious in creating five separate selections each with its own identity, movements and expression as well as utilizing their own specific costume designer.  With the five men (not very hairy legs, but so what?) displaying solid form, technique and precision, “Exploring the Artistry of the Male Dancer,” overseen by veteran 10HL artistic director Randy James, provides an entertaining glimpse into the breadth and inventiveness of American modern dance.

Unlike classical ballet with its specific positions, style and content, American modern dance contains more unstructured, free-wheeling, improvisational movement that allows for an unlimited amount of creativity. In fact, modern dance is often considered to have emerged as a rejection of, or rebellion against classical ballet.

10HL’s opening number (and my favorite) drives home the point.  Aptly titled “Slapstruck,” Derek Crescenti and Jared McAboy are stuck on each other through black Velcro costumes and engage in slapstick combat with rhythmic moves as they try to decouple from one another.  This terrifically comedic sequence absent of any music ends as they manage to strip down to tee shirts and boxers to escape the Velcro connection.

Mr. Crescenti and Mr. McAboy then join Alex Biegelson and Robert Mark Burke in “Quadrivium.” The quartet, displaying proficient technique, splits up into pairs at times during the sequence engaging in rhythmic moves and intricate lifts.

Alexander Olivieri beautifully performs a short solo (“Solo1”) clad only in shorts.  In this unique number, he uses mainly upper body movements while his legs are basically stationary.

…an entertaining glimpse into the breadth and inventiveness of American modern dance.

To Rufus Wainwright’s “Oh What a World,” Mr. Biegelson and Mr. Crescenti pair up in “Bud.” Dressed in black half-shirts and bright red shorts, these dancers heat up the stage with a high level of sensuality through a variety of moves both on the floor and through lifts and acrobatics.

The finale, “Trouble Will Find Me,” brings all five dancers in harem pants, performing to a mid-Eastern number by Nusrat Fateh Ali Khan.  This is another freestyle selection in which the performers are entangled, set free, leap, and roll around— all with precision.

10HL combines athleticism, emotion, energy, technical skills, ingenuity and range in a power-packed one-hour performance. Unfortunately, there is only one more performance left in this visit to Baltimore. Please check the group’s website to find out more about 10HL and where you could find them next.  The show should not be missed.

Running time. Approximately one hour with an intermission.

Advisory. Some dance sequences contain sensual physical contact and may not be suitable for children under 12.

“Exploring the Artistry of the Male Dancer“ plays through February 18 (3:00 p.m.) at the Theatre Project, 45 W. Preston St., Baltimore, MD 21201.  Tickets and information are available online.