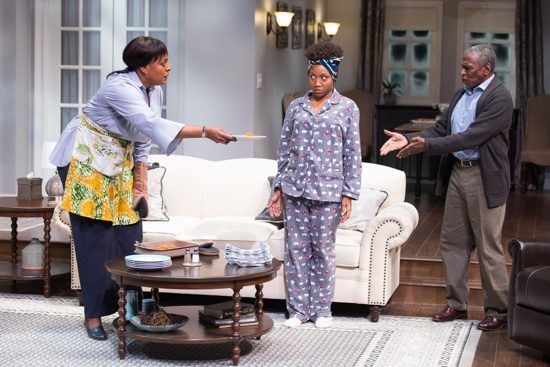 What makes up an individual’s identity? Where someone’s family is from? Where one is born? One’s name? These topics and more are explored in Danai Gurira’s newest play ‘Familiar.’ This is the fourth piece of hers that Woolly Mammoth has produced. Adam Immerwahr, Artistic Director of Theatre J, directed this triumphant exploration of identity.

Tendi is about to marry Chris and wants to honor her Zimbabwean heritage by performing a bride price (roora) ceremony. Her Aunt Anne has come from Zimbabwe to lead it. Throughout the process, Tendi and the rest of the family are faced with a crisis of identity, name, and culture.

This production is heartfelt and meaningful.

The role of Tendi is performed by Sharina Martin, a strong yet vulnerable performer who brings a grounding energy to the stage. Her fiance is played by Drew Kopas. Martin and Kopas have strong chemistry on stage.

Tendi’s younger, more artistic, sister Nyasha is played by Shannon Dorsey. She is an incredibly powerful and sweet actor who moves across the stage with electricity. Nyasha is passionate about the Zimbabwean culture and is not afraid of a fight with her family.

Chris has a younger brother named Brad who is played by Andy Truschinski. Truschinski is an utter delight on stage. His presence is light and definitely brightens the mood of whatever scene he is in.

Tendi and Nyasha’s parents, Donald and Marvelous, are played by Kim Sullivan and Inga Ballard. Sullivan and Ballard have found a balance between gentleness and force respectively. They command the dramatic moments as well as the charming dry senses of humor both of their characters have.

Marvelous’ two sisters, Margaret and Anne are played by Twinkle Burke and Cheryl Lynn Bruce. Margaret is the quieter mousey sister whose life has not gone the way she planned. Anne is committed to her people and refused to move away from Zimbabwe. Burke brings the airiness and the sadness of a woman who is desperately trying to act like she is doing okay. Bruce carries a wisdom and spirituality about her on the stage.

Immerwahr’s direction was brilliantly fluid. The stage picture ebbed and flowed naturally. The large set was designed by Paige Hathaway. The two-story house was much like the set of many American family dramas.

This production is heartfelt and meaningful. At a time in our country where immigration and identity are in question, this play feels timely. It is also something that anyone can identify with, no matter where they come from.