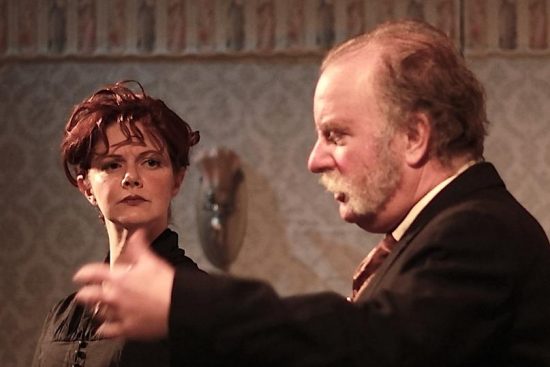 Rebecca Ellis as Maggie and Andy White as Hobson. Photo by Steve LaRocque.

Some works of theatre are given the dreaded label ‘period piece’—destined to stay locked in the time they were created. But others age quite nicely—as a well-shaped, tanned piece of leather, skillfully crafted into a comfortable boot that lasts forever, And with a little polish, it can be given to the next generation. Out from the storage comes this peculiar gem, “Hobson’s Choice,” at Quotidian Theatre Company in Bethesda, showing us with clarity that our dreams, fears and prejudices easily transfers to another era.

Set in the 1880s working-class Lancashire, England and first produced in 1916, “Hobson’s Choice” by playwright Harold Brighouse is a much more modern play than you might expect. Scattered in the everyday happenings of cobbler and store owner Henry Hobson and his frustrated daughters are resonating themes of equality and self-determination, suffrage, class movement, and ultimately, sacrifice.

The play…is full of sharply shaped scenes and moments of high comedy.

We meet ever tipsy widower Henry Hobson (Andrew Walker White) a proud middle-class owner of a respected bootery. Ah, but it is successful mainly on the skill of his workers and the astuteness of his eldest daughter, Maggie (Rebecca Ellis, in a mesmerizing performance). His secret: pay low wages to his craftsmen, and no wages at all to his daughters who run the shop and his home–pining, we find out, for a life outside the shop and marriage.

As we look in, tensions are coming to a head, as Hobson is frustrated with his three daughters growing ‘nobbishness.’ He decides to marry them off in short time, but when he realizes that it will cost him a settlement to marry them off, he quickly decides that they will stay at home, after all, dashing their hopes of lives of their own.

Maggie undercuts her father’s assertion that she is ‘too old to be married’ (a grand 30!) by putting into motion plans for her own wedding and financial situation, along with that of both of her sisters.

Her plan unfolds when a dowdy upper crust customer, Mrs. Hepworth (Jane Squier Bruns) in a hilarious scene, praises the work of bootmaker, Willie Mossop (Matt Baughman), with the instruction that all her boots be made by him. Ever resourceful Maggie, with no social connections, practically orders poor Willie to take her as his wife.

The play, which can be described as episodic, is full of sharply shaped scenes and moments of high comedy.  For example, when Hobson learns of Maggie’s marriage plans to a common worker, he dashes around the scene with belt in hand, screaming “I don’t hold anything against ye, Willie, I just have to beat the love out of you!”

Andrew Walker White’s portrayal of the father, Henry Hobson done in by his daughters comes across well. Diminutive but broad of spirit, his portrayal, adorned with fussy muttonchops and bulbous nose, came across as oh so Lancashire. There was both a hilarity and a certain sadness as he desperately tried to keep his world together and deal with changing norms.

Rebecca Ellis’ Maggie brings a gravitas to the role as a person not to be trifle with, as adept in manners of love as in running a store. Her pacing, modulated tone and icy stare were on display throughout. As the cobbler Willie, thrust into marriage and the demanding Maggie, Baughman was an entertaining treat, especially as he went back and forth between his former clumsy self and his newly propped up businessmen persona. Jean Miller entertains us in a fine cameo as the good Dr. MacFarlane who gives Hobson an ultimatum about his drinking and some life lessons for the cost of a doctor’s visit.

Quotidian’s usual workable sets served the tight spaces well, but part of the star is to the costuming—sharp, accurate, bet not ostentatious. Hobsons’s jackets and vests were charming and the younger sisters (spunky Meredith Richard and calculating Carolyn Kashner) in later outfits–post marriage–were garishly upper class. A nod to Stephanie Mumford and Claire Parker.

Director David Dubov has crafted a smooth show that delights in the small things. Especially nice was the elocution of the talent onstage, even with middle-class English accents of a century ago. Even some layers were seen, in the lawyerly highbrow talk of one of the suitors, to the bumbling gruffness of Hobson’s friend, (Jim Wheeler).  Brighouse’s characters are well observed and cleverly drawn – from the blustering Hobson, with his preoccupation with image and reputation to the astute schemer Maggie, who manages to steer everyone to a happy outcome.

“Hobson’s Choice” inevitably creaks a bit at the end, but it was way ahead of its time. This rare showing makes it feel relevant while acknowledging its accurate slice of time features.  I was surprised and how many times I laughed out loud—in both quippiness and situational hilarity of the bombastic antics of Hobson, the cleverness of Maggie and the palpable suffering of Willie.

If you are in the need for a great night out at the theatre where you can sit back, relax and enjoy a finely done classic, come to Quotidian. Make the Choice.