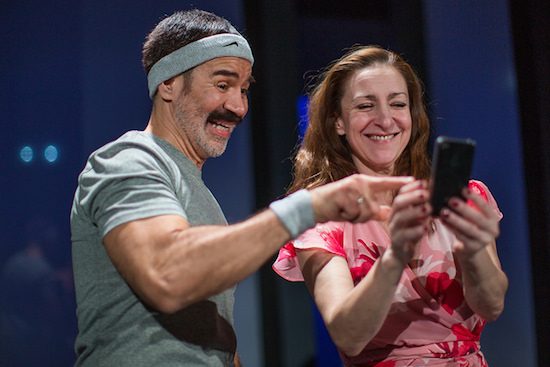 Today it is easier than ever to share information. A picture can be seen by an entire community in a limited amount of time. In “La Foto: A Selfie Affair” Venezuelan playwright Gustavo Ott explores that very thing. One selfie hurts two families. Although this could be very dramatic, the script is bitingly funny.

“La Foto: A Selfie Affair” starts with Laura, a middle-aged single woman, sharing a naked selfie with Denis, her high school sweetheart who she has not seen in twenty years. They had recently found each other on Facebook and started communicating. The selfie soon goes viral when Denis’ son, Fran, finds it and shares it with his friend. Laura and Denis must face the consequences of their virtual relationship.

“La Foto” is delightful and poignant.

Laura is played by Lux Nicolás, a spirited and energetic actress who captures the flippancy and frustration of a middle-aged woman wanting to feel desirable. She paired well with Samantha Ríos who played her daughter Kelly. Ríos is a delightful young actress who is youthful and able to capture great teenage despair.

Denis is played by Carlos Castillo. Denis’ wife, Thais, is played by the charming María Peyramaure, and their son Fran was played by José González. This dysfunctional family worked well together.

The impressive set was designed by Jessica Cancino. Cancino’s design included a grid pattern on the floor and moveable walls that were almost screen like. The shades of white and blue and angular shapes were overwhelming and made for a wonderful setting of this piece.

This is a bright and slightly hyperbolic take on the way technology can ruin relationships. It also shows how people often lead individuals on in order to make ourselves feel good. “La Foto” is delightful and poignant.

“La Foto: A Selfie Affair” is performed in Spanish with English surtitles.