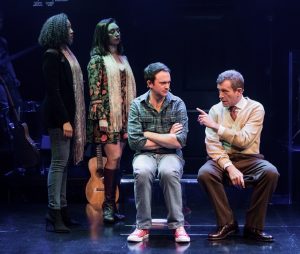 John Adams once wrote that he devoted his life to politics and war so that his children could devote theirs to science and philosophy. That sentiment is at the core of the American immigrant experience: The first generation works in fields and factories so that the second can work in offices and classrooms, and so then the third can be poets and painters.

It’s a sentiment that is also at the core of “Light Years,” the heartfelt and sincere new musical by folk rocker Robbie Schaefer now making its world premiere at Signature Theatre.

It is intensely intimate and deeply affecting…

“Light Years” is a story of a father and son who are both close and at odds. Konnie Schaefer is a Holocaust survivor and immigrant to America by way of a refugee camp in Cyprus and a stint in the Israeli army. He works as an economist so that his young son can have a more peaceful life. But when dreamy young Robbie decides that his path is as a musician, Konnie fears for his son’s security, warning that the outside world is not kind.

While there is conflict and mutual misunderstanding, Schaefer focuses “Light Years” on the intimacy of his bond with his father, a sensitive man who is devoted to his son. Schaefer plays his adult self, while John Sygar and Luke Smith portray him at earlier ages. All are strong, but the show’s highlight is Bobby Smith as Konnie, melancholy and wistful as he navigates life with this child he cannot comprehend but always is there for. Smith and the various Robbies avoid cloying “Cats in the Cradle” clichés in their portrayals.

“Light Years” is a musical only in the broad sense of the term. It is an intensely personal show – it is Schaefer’s own life story, told in his voice and songs, and it is impossible to imagine another performer stepping in to the adult “Robbie” role. While there are nine people in the cast of actor/musicians (most do double duty), this is really a one-man show, with accompaniment and with other performers portraying some of his memories.

The concert-style production – which plays out on a lit stage with just a dozen screens, a half-dozen stringed instruments, a drum set, and a keyboard in a tight 90 minutes – at times feels like the best Fringe Festival show you’ll ever see. It is intensely intimate and deeply affecting – more than one audience member was audibly weeping by the end. It also suffers some narrative flaws. “Light Years” is best when focused on Konnie and Robbie, but Schaefer explores other aspects of his life to less effect. Natascia Diaz is wonderful as Robbie’s wife Annie, but their scenes are wobbly. A brief foray into Schaefer’s hearing problems also drags the show off course.

These are by no means fatal flaws, and “Light Years” is worth seeing for the strength of its performances, its unusual format, and some truly wonderful songs by Schaefer. This production should be watched as a fine workshop production, with hopes that Schaefer will refine it into a more polished, but equally powerful, final product.