Theatre Review: ‘Lockdown’ by Cause Theatre at College of Southern Maryland 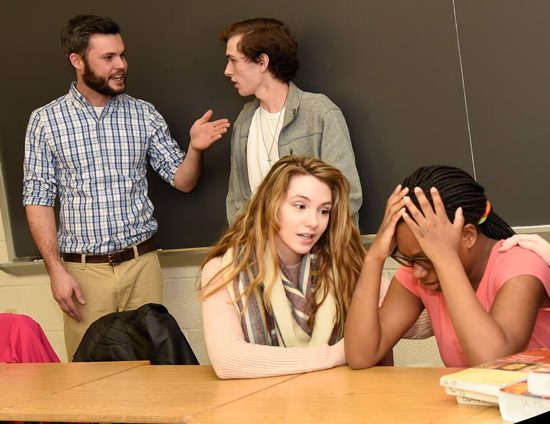 “Theatre is life, and life is theatre.” My theatre professor in college announced this revelation to his class of 30 during my first year of college. “Through theatre, we can see life in a different way. We can laugh at our own mistakes, cry through our own failures, and learn how to change the path we are on. Your life could be on that stage one day.” Never have those words rung so true for me as they did on February 1st, in the black box theatre at the College of Southern Maryland (CSM), during the performance of “Lockdown” by Douglas Craven. This show, during its half-hour runtime, managed to take the reality of our lives today and portray it so effortlessly on-stage that I forgot it wasn’t real; the likeness was unsettling.

Perhaps one of the most terrifying moments, for parents, students, and teachers alike, is hearing that voice on the announcement system that says “The school is on lockdown. Please do not leave your classrooms and follow emergency protocol…” or over the telephone “_____________ School is on lockdown. Please stay calm. We will keep you updated”.  But this January, that has been a reality for a startling number of students, staff, and parents as school shootings have happened across the nation. Already in 2018, this January held over 11 reported school shootings, according to CSM’s students. On February 1st, a middle school girl took a gun to school and shot two people. This is the reality we are living in.

Each and every piece of this show co-existed together in a dance that was flawlessly choreographed, continuing to evoke the feeling that this lockdown was somehow real. For me, “Lockdown” was a wake-up call.

“Lockdown” by Douglas Craven, is a short play that captures 2 hours in the lives of seven high school students, their teacher, and a student from Grade 9. In those two hours, the unthinkable happens; their school is put on official lockdown because of an unauthorized and potentially dangerous intruder. Emotions run wild as the seven classmates yell, cry, and try to come to terms with what might happen, and what they should do next. Craven created characters that are so perfectly flawed and cleverly clichéd that it is not hard to picture yourself as one of them, maybe more than one as the story continues. Craven’s genius in crafting the script was clearly portrayed through the young actors on stage. He took those seven characters and gave the audience a snapshot of their real emotions, their back-stories, and their relationships with one another without telling the audience anything. I quite literally felt as though the conversations being had in the show were conversations I had witnessed in my school years, which only proved to make the show more real. Each of the young actors and actresses truly had to commit to their characters from the moment the house opened, for they were interacting with one another the entire time we were being seated.

This directing choice created an atmosphere, coupled with the setting of the classroom that provoked audience members to exclaim “I feel like I’m in high school again.” Then, as the play began, I marveled at the directing choice for another reason. The audience seats lined the edges of the classroom on the three sides closest to the door, and some of the audience even sat behind desks within the classroom. Sitting in the audience seats, within that small classroom that serves as CSM’s black box theatre, surrounded by desks, chairs, and books, I began to feel as though we were locked in there too. We were trapped with those seven students, their teacher, and the student from Grade 9. Someone out there in the halls had a gun, and we were in danger. The staging was so brilliant to create that kind of atmosphere.

Amidst the heaviness of the topic, and the emotional rollercoaster that the students experience in the show, there were moments of light humor. One such that I greatly appreciated was the moment when the seven classmates are sitting in class, cooling down after a small argument, and Tyler (portrayed marvelously by Nathan Daetwyler) asked: “Who farted?” Laughter rippled through the audience and cast. Moments like those gave credibility to the characters and created an empathetic bond between the audience and those seven students on stage. Craven was clever to include those humorous bits, and the actors played them well.

Sarah, portrayed expertly by Ebie Predeaux, simply oozed false confidence, sarcasm, and had a perfect comeback for everything. Liz, portrayed magnificently by Devorah Henry, caught your heart as her ‘tough girl’ persona peeled away during the lockdown and the audience saw her genuine fear. Mr. Karsh, the teacher of this classroom, was portrayed quite believably by Sean Smith, and even his short time on stage left the audience concerned for him as the lockdown continued.

Overall, I think the cast did a wonderful job telling this story, and each of them added a layer of believability to an already reality-heavy show. The costumes were perfect for each character, and the timing of each sound effect was so on-point that I began to think it wasn’t just a sound effect. Each and every piece of this show co-existed together in a dance that was flawlessly choreographed, continuing to evoke the feeling that this lockdown was somehow real. For me, “Lockdown” was a wake-up call.

From the opening of the house to the final bows, I couldn’t help but think about the statistics of school shootings, the emotional turmoil of those who are involved in them, and how frequently they are happening.  I haven’t stopped thinking about this show since I left the theatre. We need more of this kind of theatre. CSM managed to take theatre and show me real life, the life that engulfs me and get me to truly think about what is happening out there in our world right now. The words of my professor haunt me: “Theatre is life, and life is theatre.” “Lockdown” took the real life that we have become numb to and made it even more real, more thought-provoking, and truly drove it home. As they said at the end of the show, “What if it was your kids, your classroom, your life?” It could happen to any one of us, anywhere, at any time. What would you do? Would you wait, or would you run?

“Lockdown” is no longer playing at the College of Southern Maryland in La Plata, MD. For more show information about cause theatre, please see here.