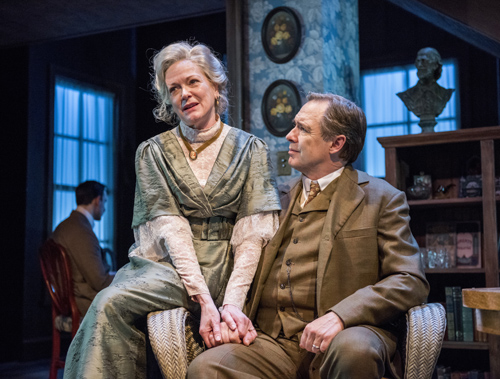 Eugene O’Neill’s classic, the Pulitzer Prize and Tony Award-winning “Long’s Day’s Journey into Night,” is currently being presented by Everyman Theatre. The play is set over a period of one day in 1912 at the Connecticut summer home of the Tyrones. Published posthumously, it is an emotionally draining and poignant autobiographical portrait of an Irish-American family caught in a cycle of addiction, recrimination and lost dreams while simultaneously clinging and clawing at each other. The saddest truth is that their love runs deep.

Director Donald Hicken describes the play as “the holy grail” for actors. The characters are complex and nuanced, with so many emotional layers and extremes that turn on a dime. Hicken has assembled a formidable cast that is more than up to the task. He does a brilliant job of directing them in this production.

One of the finest actors I have ever seen is celebrating her 20th year as a resident company member of Everyman – and one of the reasons Artistic Director Vincent M. Lancisi chose to tackle this monumental play this season. I have never seen Deborah Hazlett give anything but an incredible performance and this is no exception. She is a force of nature as Mary, the morphine-addicted mother of Jamie and Edmund and wife of a once-successful actor, James Tyrone. A quiet storm of passion and frustration, Hazlett conveys all of this with nuance and grace.

Mary has just returned from the sanitarium yet again. Though she has managed to hold it together for awhile, her family, as well as the audience, can tell she is about to unravel. Anyone who knows someone with addiction can see the “tells” no matter how subtle. The tragedy is that how she became addicted was no fault of her own. But many other issues are at play. Mary was not cut out for the road with its cheap hotels. It was lonely waiting for her husband to come home – often in his cups – from each performance. She yearns still for permanence which is not found in their shabby summer home.

In his Everyman debut, Kurt Rhoads as James Tyrone, does a fine job as the stingy patriarch of the family. Shakespeare is his favorite writer and of course, insists the Bard was Irish. Once a promising young actor, the memory of his poor, immigrant roots turned him into a miser. He never stretched his potential. Instead, he bought into performing one role for years because it was easy money. These days, it’s questionable real estate deals. James is disappointed in his sons because they haven’t lived up to his expectations and fights with them constantly.

At times James’ cheapness is comical (keeping only one bulb on in a three-bulb lamp) but you want to scream when it comes to his family. It is discovered during the course of the play that his youngest son, Edmund (a wonderful performance by resident company member Danny Gavigan), a promising writer who ran away to travel the world as a sailor, has developed “consumption” (tuberculosis). It is no surprise to anyone is that his father wants to send him to a state-run sanatorium – the least expensive option.

Jamie (Tim Getman in a powerful performance in his debut role as a company member) followed in his father’s footsteps as an actor but hasn’t made much of a success of it. Though his father is a serious drinker, Jamie is a full-blown alcoholic who prefers gambling and the company of hookers. His father thinks he’s bum. In turn, Jamie blames his father’s cheapness for his mother’s addiction. A hotel doctor had given her morphine during Edmund’s difficult birth. But there is no question that James loves his wife of 35 years.

The sweet moments amongst the family are hard to sustain. In the blink of an eye, they open old wounds, battle and then just as quickly, return to apologies and words of kindness and affection. It is schizophrenic. James and Edmund share a father-and-son conversation while drinking and playing cards. Even as they reach a better understanding of one another, the moment is punctuated with fighting. While Jamie loves his brother more than anyone, he admits he will try to make Edmund fail because of his jealousy.

As Mary sinks deeper into her addiction, she does what any addict does – escapes, lies and avoids the truth. She is so lonely, that while the men are out, she seeks the company of the housemaid (Katharine Ariyan in a lovely turn and who provides some comic relief). Before our eyes, Mary is slipping away. The drug drives her further back into her past when she was a child, schooled by nuns (even wanting to become one), playing the piano and remembering falling in love with her husband.

This stellar cast is supported by the beautiful and detailed work of the creative team. Set designer Daniel Ettinger, lighting designer Jay Herzog and costume designer David Burdick weave their magic into this production. Original music was provided by Patrick Calhoun.

Though this is one day in their lives, you can’t help but feel this is an endless cycle for the Tyrone family. Your heart aches for them. This play is a commitment for the theater-goer but well worth it. Everyman has, again, created a beautifully-realized production.