Theatre Review: ‘Something Rotten’ at the National Theatre 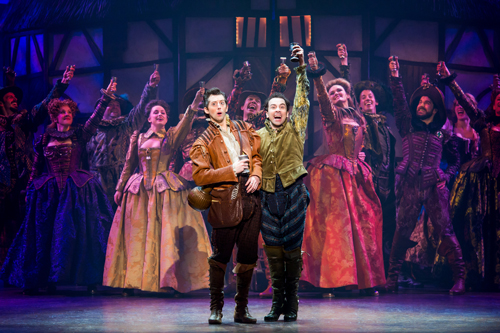 Get thee to the National Theatre as soon as possible! The Tony Award-winning musical, “Something’s Rotten” has come to D.C.’s National Theatre until February 18 and it is one of the most hysterical, side-splitting homages to theater you will ever see. With a book by Karey Kirkpatrick and John O’Farrell and music and lyrics by Wayne Kirkpatrick and Karey Kirkpatrick, it is a brilliant mash-up of Shakespeare with references to nearly every great musical to grace the stage.

Opening on Broadway in 2015, “Something’s Rotten” was nominated for every award under the sun, with Christian Borle taking home a Tony and Drama Desk Award. Having been fortunate to attend the musical when it first opened, it is nice to see that they have not skimped on the tour. It comes with all the delicious trimmings – the colorful, gorgeous costumes by Gregg Barnes; the massive, beautifully detailed sets by Scott Pask; and a live orchestra. Director and choreographer Casey Nicolaw gives us a big, splashy Broadway musical with all the bells and whistles. It is a pure delight!

“…one of the most hysterical, side-splitting homages to theater you will ever see.”

Set in London of the 90s – the 1590s that is – the show opens with the catchy “Welcome to the Renaissance.” Here, playwrights like Christopher Marlowe and Thomas Kyd are the rock stars of the day with William Shakespeare at the top of the heap.

The show features three actors who wrapped up the run on Broadway before going on the tour. Rob McClure (critically acclaimed for Broadway’s “Chaplin” brings all his energy and talent to this role ) plays Nick Bottom and hometown favorite, Josh Grisetti, plays his brother Nigel. (Last seen as Shrevie at the Signature Theatre in Barry Levinson’s “Diner the Musical.”)

Adam Pascal – who played in rock bands before he hit it big in “Rent” as the original Roger Davis in the play and film – is a riot and perfectly cast as the strutting, egotistical Will Shakespeare – a Renaissance Steven Tyler in flashy garb. He would rather party and enjoy his fame than write, as he laments in the fabulous “Hard to be the Bard.” We find out before his success as a playwright, Will was part of Nick’s acting troupe.

Brothers Nick and Nigel Bottom are barely making it and looking for that one big hit – and Nick has a wife to support. Bea (the wonderful Maggie Lakis, McClure’s real-life wife) is the ever-optimistic and encouraging mate. She even disguises herself as a man to take on various jobs to help out.

Though Nick is jealous of Will, he secretly admires his ex-friend (“God, I Hate Shakespeare”). Nigel (a sweetly naive Grisetti, with a Ray Bolger quality) is a shy poet and does the writing for the brothers’ plays. He also loves the work of the Bard. Will invites Nigel to a performance (and after-party) for his fans in the park (“Will Power”) – yes, it’s Shakespeare in the Park.

Nigel has fallen in love with Portia (a fantastic Autumn Hurlbert) a poetry-loving daughter of a Puritan, Brother Jeremiah (the amusing Scott Cote), determined to shut down all the theaters. Brother Jeremiah cannot seem to help making sexual innuendos every time he speaks. Jeff Brooks is marvelous as Shylock, a cheerful and enthusiastic theater-loving Jew who wants to produce Nick’s show.

Desperate for a hit, Nick goes to a soothsayer, Thomas Nostradamus (a fantastic Blake Hammond) for help. He predicts that “A Musical” is the future of theater. This number is one of the many showstoppers of the evening. It sends up every musical from “South Pacific” to “Chicago” to “Rent” and everything in between. We even get tap dancing and a Rockettes-style chorus line.

Furious after he rescues his brother from Will who is trying to steal his work, Nick returns to the soothsayer to find out what will be Will’s greatest play. Nostradamus gets his wires a little crossed and the result is “Omelette: The Musical.” “Make an Omelette” is another showstopper with Shakespearean and musical theater references again flying at light speed.

Of course, all’s well that ends well despite more mayhem to follow. The puns and theater references are fast and furious – it tests even the most avid theater fan. But even if you aren’t as fanatical as some, this production is one of the best nights at the theater.

All the voices are spectacular and the ensemble deserves kudos for their tireless work backing up this great cast.