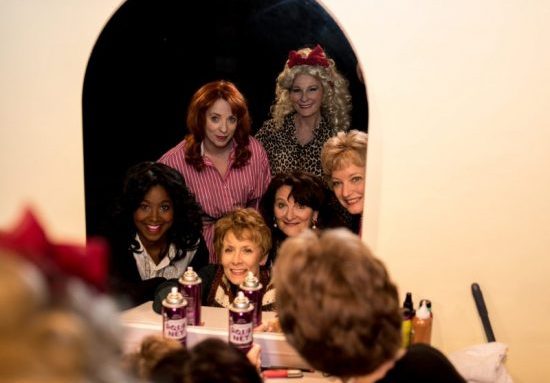 There’s a well known saying that says “friends are the family you choose for yourself.” Never is this truer than in the iconic play “Steel Magnolias,” now playing at Kensington Town Hall.

“Steel Magnolias” is the story of a group of southern women who bond while spending time together in their small-town beauty parlor. The shop is run by Truvy (Edye Smith), who may be a bit forgetful, but knows how to do hair. She always gives thanks that “there’s no such thing as natural beauty.” At the opening of the show, she is in the process of hiring a new stylist, the shy Annelle (Christine Olivia Wells) who passes the test and becomes the newest fixture in the shop.

…if you want to laugh out loud, and perhaps shed a tear or two, or just bask in the warmth of female friendship in this cold February…

They are soon joined by some of Truvy’s most loyal customers; first, the town matriarch and widow of the recent mayor, Clairee (Frieda Enoch). Clairee loves their town and high school football and talking about both. They are soon joined by M’Lynn (Janet Van Albert Replogle) and Shelby (Emily Karol) a mother-daughter team that are both pretty stressed since it is Shelby’s wedding day. The group is completed with the arrival of the curmudgeonly Ouiser (Liz Weber), who isn’t crazy; she’s just been in a bad mood for the past 40 years. Together, these 6 women will form a bond that weathers marriage, religion, illness, disagreement, and even death.

Robert Harling’s play first premiered in 1987; he wrote it while dealing with the death of his sister. Most people are familiar with the story from the film adaptation that debuted in 1989, starring Julia Roberts, Sally Field, and other huge stars of the late 1980s. Both the film and play are considered classics and are still well known to this day. The theme of the power of female friendship is timeless.

Kensington Arts Theatre’s production of this classic piece of theater is a well-crafted joy. One of the biggest challenges in producing this work is the delicate balance between the comedic and dramatic elements of the story, but with Nunemaker’s direction, this cast is most definitely up to the challenge. Smith charmed as the proverbial glue that holds this rag-tag group of women together. You can definitely see the parallels between her and her film counterpart, Dolly Parton. Van Albert Replogle turned in an affecting performance as M’Lynn, her exasperation with her daughter always filtered through a fierce layer of love. Her scene with Shelby where they discuss her future and her decisions, Van Albert Replogle is able to represent her anger and fear, but also joy in Shelby’s happiness. On the other side of the mother-daughter relationship, Karol delivers a dynamic portrayal of the plucky Shelby. Karol takes a character that is contrary to a fault and transforms her into a three-dimensional young woman with strength and courage, who is not afraid to fight for the life she wants. As she says in Act II, “I’d rather have 30 minutes of wonderful than a lifetime of nothing special.”

Wells takes the audience on a journey with Annelle, who grows and develops a great deal as a character during the show’s duration. Enoch and Weber really bring the laughs as the dueling Clairee and Ousier; it’s difficult to decide which of the two is the most comedic. Together, the audience could really sense a true bond between these 6 women, which is one of the biggest things that made this production successful.

The technical aspects were also strong, particularly the stage design and costume design. Paul Levine’s set provided the homey atmosphere of a small-town beauty parlor that allowed the audience to feel the refuge these women took there. Since the entire play is set there, Levine was able to add an enormous amount of detail, since there did not need to be quick changes made between scenes. The most impressive aspect to this reviewer was a seemingly real, working sink onstage, which was used to rinse M’Lynn’s hair. The show is set in the 1980s, so the fashion is very distinctive. Elizabeth Morton did a fantastic job with providing costumes that could be easily recognized as being from the 1980s, without being a caricature.

So if you want to laugh out loud, and perhaps shed a tear or two, or just bask in the warmth of female friendship in this cold February, stop by the beauty parlor at Kensington Town Hall and see “Steel Magnolias.”

Advisory: Due to some adult themes, this show is recommended for audiences 13 and older.