Theatre Review: ‘The Boys Next Door’ at Port City Playhouse 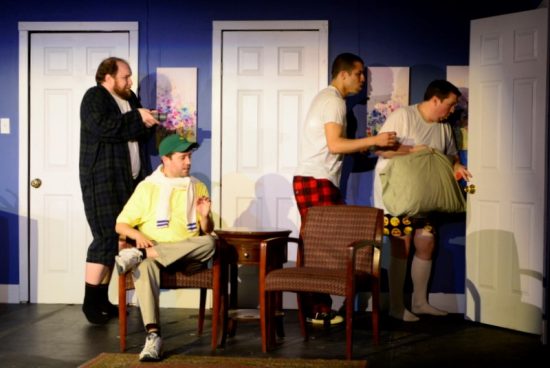 Set in a homey apartment with a view of the local prison, Tom Griffin’s “The Boys Next Door” is a funny and deeply moving glimpse into the lives of four mentally handicapped men living in a group home and their caring, but burned-out social worker, Jack (Chris Galindo).

Each character displays his unique quirks and challenges as the shenanigans unfold.  Arnold (John Wakefield), a man with an obsessive-compulsive disorder who works as a janitor, repeatedly threatens to move to Russia when frustration strikes.  Arnold’s roommate, Norman (Matt Williams) who’s put on a few pounds since starting work at a donut shop, is fantastically possessive of his large ring of keys.  Lucien (William Jeffreys), a lovable young man who can’t read, proudly displays his library card and the pile of books he’s recently borrowed, and Barry (Michael Schwartz), a man living with schizophrenia, has come to believe that he is a pro golfer.

A special theatre experience awaits you at Port City. “The Boys Next Door” will pull at your heartstrings, charm you with their antics, and not soon be forgotten.

The men fight with each other, support each other, and lean on Jack when life gets overwhelming.  When Barry’s abusive father (Jerry Gideon) pays him a visit, Jack is there to soften the blow.  When Norman needs a nudge to approach his crush, Sheila (Mary Ayala-Bush), Jack is there. He’s there to accompany Lucien to the state Senate when his disability funding is threatened, and when Arnold attempts to run away to Russia, Jack finds him at the train station and takes him home.

The actors, under the direction of Kevin Sockwell, render each character with respect and compassion.  William Jeffreys, whose performance brings out Lucien’s sweet sensitivity and child-like innocence, also provides one of the play’s most poignant moments when he steps out of character to explain Lucien’s inner struggle to survive in a world he finds both confusing and chaotic.  Michael Schwartz (Barry), who causes the audience to dissolve into laughter when he gives the unsuspecting Mr. Hedges (Jerry Gideon) a golf lesson, is equally adept at communicating the character’s profound hurt at his father’s indifference.

Other stand-out performances include John Wakefield’s convincing portrayal of the anxiety-ridden Arnold, whose reaction to the alleged rat infestation is priceless, second only to the hilarity of his dramatic theft of the doormat, and Matt Williams, who brings to life Norman’s abiding love of donuts and frequent mood swings in his pursuit of true love.  Chris Galindo (Jack) is the voice of reason, deftly communicating his character’s frustrations while encouraging the audience to see the humor amidst the struggle.

The intimate setting is ideal for this play, complemented by a set design (Becky Patton) that evokes the atmosphere of a pleasant, no-frills two-bedroom apartment and lighting (Mary Beth Smith-Toomey) and sound design (David Correia) that enhances the action onstage.

A special theatre experience awaits you at Port City. “The Boys Next Door” will pull at your heartstrings, charm you with their antics, and not soon be forgotten.

Running Time:  Approximately 2 hours and 15 minutes with one intermission.

A native northern New Yorker, Jeannette has a fondness for used books, off-the-beaten-path travel, and of course, live theatre. She earned a master’s degree from Georgetown University and an undergraduate degree from the Peabody Conservatory of Music in Baltimore, MD. She is currently pursuing a Ph.D. at George Mason University in the Writing and Rhetoric program.