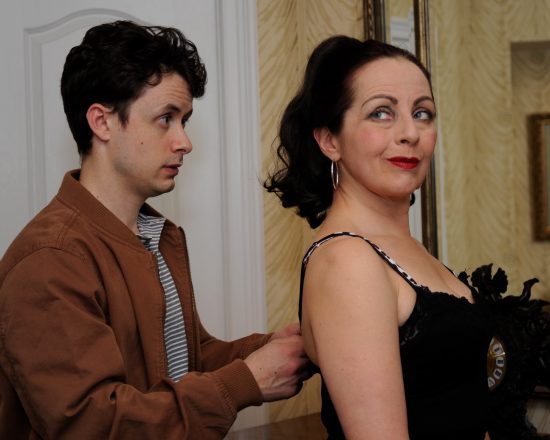 Based on the 1967 cult film of the same name, Dundalk Community Theatre’s “The Graduate” tells the story of a young man named Benjamin Braddock (Stephen Edwards) as he struggles to find purpose following his graduation. In doing so, he becomes stuck in the center of a disastrous web of love and lust involving a family friend’s wife, Mrs. Robinson (Dyana Neal) and her daughter, Elaine (Elisabeth Johnson). Although the overall plot remains similar to that of the movie, there are some notable changes made, including the convergence of some scenes in order to conserve time.

The show’s ensemble […] deepened the world of the play and was a vital component in establishing the zeitgeist of the story’s setting in the early 1960s.

Admittedly, the script of the show itself leaves something to be desired. The dialogue is not especially captivating, and the uneven pacing of the show felt forced and unnatural. However, the cast was nonetheless able to create an immersive, heartfelt performance from a rather lackluster script. Of particular note was Elisabeth Johnson as Elaine, Benjamin’s demure, kind-hearted love interest. Johnson’s performance effectively juxtaposed her character’s many complexities with her seemingly simple exterior, to create a character who was deeply empathetic.

Dyana Neal also gave a strong performance as Mrs. Robinson, playing up the character’s intense nature and coarse personality to remarkable effect. Mr. Robinson (John Dignam) and Mr. Braddock (Thomas “Toby” Hessenauer) both stood out in their respective roles, bringing levity to their more comedic moments and depth to their characters in their darker scenes. The show’s ensemble, which included Rachel Verhaaren, Sam Ranocchia, Albert J. Boeren, Eva Grove, and Tate Erickson, deepened the world of the play and was a vital component in establishing the zeitgeist of the story’s setting in the early 1960s.

The most impressive parts of this production were the technical elements, all designed by Marc W. Smith. The lighting impactfully but subtly added to the tone of the show, creating a cinematic atmosphere and effectively evolving with the emotionality of each scene. The set design was incredibly clever and cohesive; the same three white-shuttered walls were used in each scene, with the furniture inside denoting the location. The effect was chameleon-like; although only a few set pieces were being interchanged each scene, each set was nonetheless completely engrossing, and utterly unique. The various songs played between scenes were pulled from the original movie’s soundtrack, a fond reference to the source material, and yet another tribute to the era.

Though some aspects of “The Graduate” were underwhelming, Dundalk Community Theatre was able to make up for it and then some, ultimately putting on an enthralling show. The enthusiasm of the cast and the beauty of the lighting and the sets make this show a worthy tribute to the classic film.