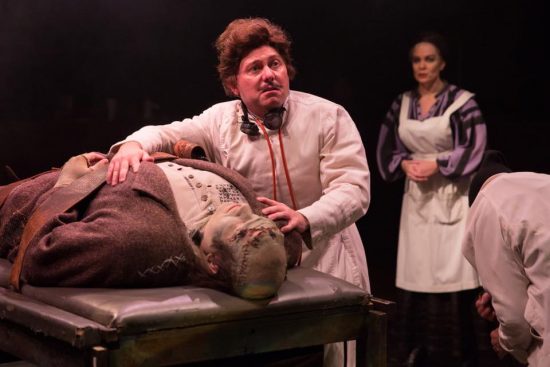 Fans of Mel Brooks, the comic genius behind such movies as “Spaceballs,” “Blazing Saddles,” and “The Producers,” will enjoy his live stage musical, “Young Frankenstein,” also based upon his film of the same title, now getting a frightfully funny musical production at Toby’s Dinner Theatre.

Under the direction of Mark Minnick, Toby’s “Young Frankenstein” stays true to the Mel Brooks style of comedy, all while adding sincere elements to the characters, resulting in satisfying storytelling.

The story begins as Dr. Frederick Frankenstein (Played by a terrifically eccentric, yet accessible Jeffrey Shankle) is a lecturing about the brain at Johns, Miriam, and Anthony Hopkins School of Medicine when he receives word from a solicitor that he has inherited his family’s estate in Transylvania.  Frankenstein comes from a long line of nutty scientists, including his grandfather whose experiments in re-animation led to the creation of a monster.

Frankenstein’s untouchable fiancee, Elizabeth (in an unstoppable performance by Alicia Osborn) stays behind in New York while the Dr. travels to Translvania to inspect the property.

…frightfully funny…some of the most fun I’ve had in a long time!

Throughout their adventures, Brooks has interwoven fun songs like the Vaudeville-like tune, “Together Again” and the spooktacular “Join the Family Business.”  The song “The Brain,” where Frankenstein teaches about the brain is, at times, a fast-paced patter song, not unlike the style of song that comic legend Danny Kaye used to sing.

The song that practically stopped the show was the one song not written by Brooks.  It was the classic song by Irving Berlin, “Puttin’ on the Ritz.”  Christopher Kabara as The Monster gained some of the biggest laughs of the evening while singing the lyrics “Puttin’ on the Ritz” and “super duper.”  This production number is where everything about the show seemed to work to optimal quality.  I won’t be giving away any surprises here, but I can say that the ensemble looked dapper as they tapped in their top hats and tails.

Supporting roles include the always entertaining David Bosley-Reynolds as Inspector Kemp and the one and only Robert Biedermann as Mr. Hilltop, Shoeshine Man, and Hermit.

Director and choreographer Mark Minnick said, “Every department gave their all to make ‘Young Frankenstein’ come alive in such an enjoyable, creative, artistically fulfilling manner. We have a great team on and off stage at Toby’s. The rehearsal process at Toby’s is unique and I am so proud of the work this talented cast brought to the stage.  I am very proud to know them as not only co-workers, but good friends.”

The strong vocal harmonies and electrifying dances performed by Toby’s ensemble, along with the snappy live orchestra, musically directed by Ross Scott Rawlings, and the spot-on comedic timing from the frightfully funny leads, really brought to life a show experience that was some of the most fun I’ve had in a long time!

Running Time: 2 hours and 40 minutes, including one 20-minute intermission.

Advisory: Adult language and themes. Fog, haze, and strobe effects may be used in this production.