1. “The Boys Next Door” at Port City Playhouse

“A special theatre experience awaits you at Port City. “The Boys Next Door” will pull at your heartstrings, charm you with their antics, and not soon be forgotten.” – Jeannette Mulherin.

Synopsis: In an urban communal residence, four mentally handicapped men live under the supervision of an earnest, but increasingly “burned out” young social worker named Jack. Norman, who works in a doughnut shop, takes great pride in the huge bundle of keys that dangles from his waist; Lucien has the mind of a five-year-old, but imagines that he is able to read and comprehend the weighty books he lugs about; Arnold, the ringleader of the group, is a hyperactive, compulsive chatterer, who suffers from deep-seated insecurities and a persecution complex; while Barry, a brilliant schizophrenic devastated by the unfeeling rejection of his brutal father, fantasizes that he is a golf pro. This is a world where the “little things” of daily life sometimes become momentous–and often very funny—and are mingled with moments of great poignancy. 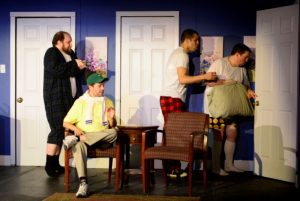 “…a fantastic show for the whole family.” – Kristin Franco.

Synopsis: Alexander is having a bad day. A terrible day. A horrible day. To be quite honest, it’s a terrible, horrible, no good, very bad day. But then, everybody has bad days, sometimes. Not only does Alexander wake up with gum in his hair, but his mother forgets to pack him dessert, and his best friend decides he’s not his best friend anymore. And if that’s not bad enough, Alexander’s brothers don’t have any cavities but—he does. And just when it can’t get any worse, there are lima beans for supper and —yuck!—kissing on TV. It is enough to make anyone want to go to Australia. Uuuugggghhh. 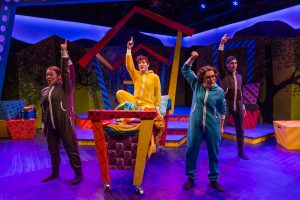 The cast of “Alexander and the Terrible, Horrible, No-Good, Very-Bad Day.” Photo by Michael Horan.

“…frightfully funny…some of the most fun I’ve had in a long time!” – Mark Beachy.

Synopsis: IT’S ALIVE!  This electrifying adaptation of Mel Brooks’ monstrously funny film will leave you in stitches. The musical re-imagining of the Frankenstein legend follows young Dr. Frankenstein (that’s Fronkensteen) and Igor (that’s Eye gor)  as they attempt to create a monster, but not without scary and hilarious complications. Young Frankenstein is scientifically proven, monstrously hysterical entertainment – Mel Brooks style. Please note: Fog, haze and strobe effects may be used in this production. 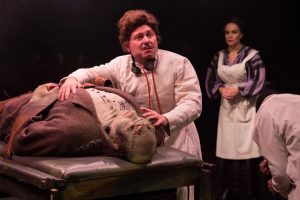 Synopsis: In this hilarious comedy of turn-of-the-century Lancashire manners, curmudgeonly cobbler Henry Hobson faces the ultimate choice: take a life with three daughters and keep them in his shop forever unmarried (and save staff wages and dowry money), or let them wed their sweethearts and leave him all alone (with no business). Eldest daughter Maggie has a plan to thread the bootmaking needle and she has inherited her fathers strong will to make it happen! QTC presents this slice-of-life play that the Guardian says has shades of King Lear and Taming of the Shrew as well-made and comfortable as a stout pair of boots. Directed by David Dubov with assistance from Washington Stage Guild director/actor Laura Giannarelli. 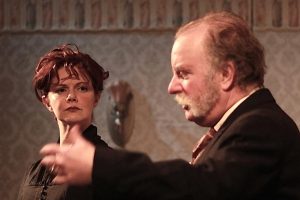 Rebecca Ellis as Maggie and Andy White as Hobson. Photo by Steve LaRocque.

5. “You Can’t Take It With You” at the Laurel Mill Playhouse.

Synopsis: The Sycamores may seem mad, but if they are mad, the rest of the world is madder. See the hilarious mayhem when Tony, attractive young son of the Kirbys, falls in love with Alice Sycamore and brings his parents to dine at the Sycamore home on the wrong evening, the shock sustained by the Kirbys shows Alice that marriage with Tony is out of the question. Will love win out in the end? Find out in this delightful comedy.

For tickets and the Quick 5 article with director John Cusumano, click here. 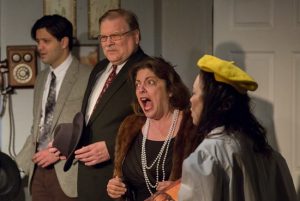