‘A Quick 5’ with Lisa Levine 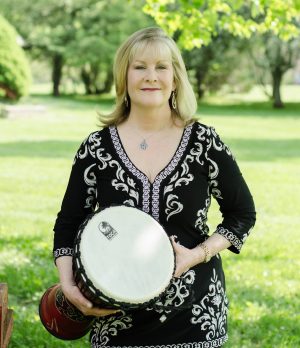 Lisa Levine is a nationally known cantor, composer, recording artist, author, and worship artist. After 30 years of Cantorial pulpit work and following her Rabbinic Ordination through Aleph Alliance for Jewish Renewal in Januar, Lisa will take on the new role of Religious Leader of Seaside Jewish Community in Rehoboth Beach, Delaware beginning in July 2018.

Lisa was influenced by Jewish songwriter Debbie Friedman at an early age, she was inspired to be a URJ camp song leader and active in the Reform Jewish youth movement. She was invested Cantor in 1989 and has been worshiping with congregations ever since. Lisa has published multiple CDs and songbooks and her music has been featured and performed at URJ Biennial conferences for over 10 years. Lisa’s choral series is published by Transcontinental Music Publications and you have probably heard some of her music in your own congregation. Lisa studies and teaches yoga and is the creator and author of “Yoga Shalom” a unique Jewish embodiment-of-prayer worship Book/DVD/CD distributed by Behrman House Books.

Lisa is a member of the American Conference of Cantors, OHALAH Conference as well as the Women Cantor’s Network. She is a JSSA chaplain and shares worship and Music and Spirituality workshops in area Retirement and Assisted Living Facilities. She serves as treasurer on the Board of the RPA Rabbinic Pastoral Association of Aleph.

READ review of her album, “Bridge to Peace.” 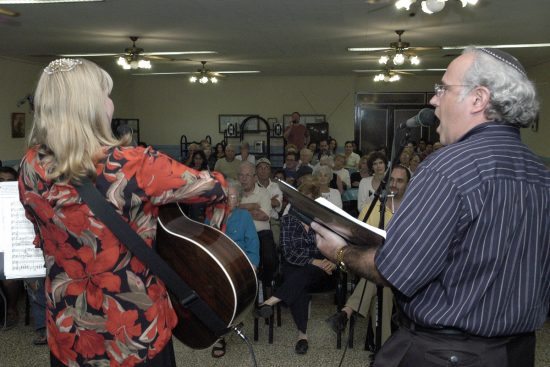 Lisa Levine and Cantor Manny Pearlman in Concert at the Patronato.

What inspired you to become a composer?

My first real prayer composition was the song “Ruach Elohim.” I was on my way to a Regional URJ Conference in Little Rock Arkansas from Dallas, where I served in my first pulpit. I was to lead Shabbat Evening Services that night with Cantor Jeff Klepper and I was a little anxious. Still, my mind was on my Rabbi, Ken Roseman who’s wife Helen had recently been diagnosed with cancer. I was thinking of a blessing I could give to him and Helen and “Ruach Elohim,” my version of the Hebrew Y’varechecha, May God Bless You and Keep You, came into my head. The song wrote itself on the plane and by the time I hit the service anthem at around 9:00 p.m. I decided to sing it for the first time right there and then. People’s reaction was really good so I knew it was a hit and has since become really popular. From that point on I began writing from a place of inspiration and healing as well as to fill the need for a prayer and a setting of a special text.

Can you give us some insight into how you compose a song?

A song can come from anywhere. A melody can jump into my head at any time and I will usually record it on my phone. Sometimes a text comes into my mind first and then i can go back to all the melodies i’ve recorded and see what might fit. Still other times a song writes itself together, like my “MiSheberach,” which was sort of channelled through me in a very short amount of time. I received the news that my friend Cantor Stuart Pittle had died suddenly of a heart attack. I cried and then walked into my backyard and the prayer just flowed out of me. I like to think that Stuart’s spirit was guiding me in that prayer and I think of him every time I sing it. I’ve been commissioned to write many songs and I usually work from a text and wait for a melody to form around the meaning of that text. Writing is my way of expressing what’s in my heart and how I want to effect change in the world.

What song are you most proud of in ‘Bridge to Peace’ and why?

That’s a hard question. Each one of them has deep meaning and was written with either a situation or a person in my heart. For example, “Lo Milchama” was written after the Sandy Hook shooting. It’s a prayer about gun violence. “May The Angels” was written for a dear friend who died from bladder cancer and I wrote it for his transition to the after life. “Bring Healing Down” was written at the bedside of a Minister who had lost his leg. I guess if I had to choose one it would probably be the title track: “Bridge To Peace.” It has special meaning because it was written for a woman I met at during an overnight on call and developed a relationship with her over her stay at GMUH. I recently officiated at her funeral and sang the song as a memorial prayer for her bravery and spirit. 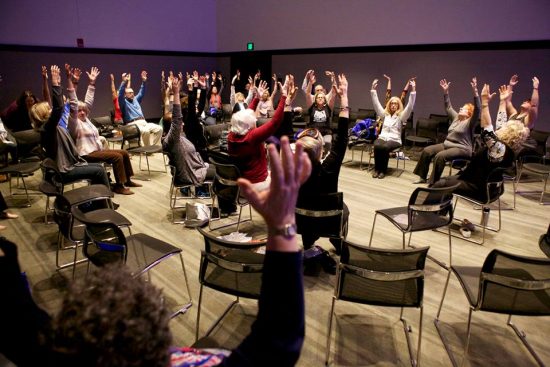 What is Yoga Shalom?

“Yoga Shalom” is my book which links Yoga and Jewish worship together in a spiritual embodiment practice which includes sacred chant, mindfulness, meditation, yoga asana, and relaxation. I began practicing Yoga in NYC when I was a grad student at HUC and working a few jobs. The stress was brutal and I used Yoga to improve my coping skills as well as my prayer focus and vocal prowess. Later on when I was asked to teach Yoga and worship at a URJ Biennial I began to play around with music tracking which would link the elements of the Shabbat morning service together with simple Yoga postures and their embodied prayer equivalents. The book/DVD/CD was born and is still growing today. I’ve added elements of Kabbalah and body energy centers to the practice as well as more sacred chant and drumming. It’s an amazing window into the deep well pool of renewing energy that we can all use every day in our stressful lives. 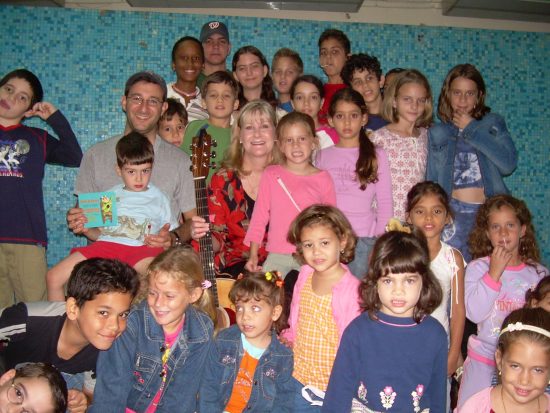 Lisa Levine with the children of the Patronato Religious School.

Please talk about your work with The Jewish Community of Cuba.

My first Mission to Cuba was in 2005. I went down with a group from my Congregation and brought 500 lbs of humanitarian aid to the Jewish Communities there. I also did a series of concerts in Havana and in outlying areas. My first concert in Havana was at the Sephardic Synagogue and the reaction to the songs I sang was unforgettable. I sang Ladino and Yiddish, Hebrew, and Cantorial songs. I was surprised when the Yiddish songs I sang caused the older people to cry openly. They said they hadn’t heard these songs since they were children, before they immigrated to Cuba from Poland and Eastern Europe. When I returned to Baltimore I decided to record a CD just for the Jewish Community of Cuba which i did! I called it “Mis Canciones Para Los Judeos De Cuba” My Songs for the Jews of Cuba. It was released in 2007 just before I returned to Havana for the second time and performed another concert at the Patronato Community Center! I gifted a copy of the CD to every local family in Havana who attended the concert as well as in outlying areas we visited. After three more Humanitarian Missions to Cuba and many concerts all over the country I’m a bit of a celebrity there. One of the National choirs in Cienfuegos even sings one of my songs: Hallelu, Hinei Ma Tov! I love the people and Jewish Community of Cuba and plan to visit again soon.

Recently I’ve become involved with assisting a Jewish community in Eastern Uganda called Namutumba. I sit on an advisory board for Ezra Uganda Assistance which is bringing crucial sustainable food sources, solar power, education, clean water and medical help to a faithful Jewish Community! These incredible people need our help so desperately and I’m called to the challenge of seeing that they get it!