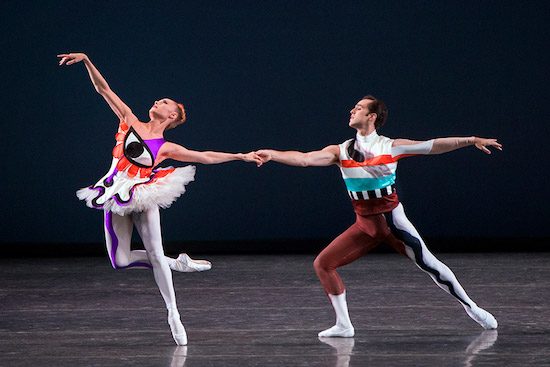 Before seeing “Works by Balanchine, Martins & Peck” this week at the Kennedy Center, I had only known the New York City Ballet (NYC Ballet) as a researcher: through old films and the words of dazzled writers in the age of legendary founder and choreographer George Balanchine, now deceased.

Those years are gone. In this performance, there was no Patricia McBride pirouetting around the stage, no Balanchine in the wings, no “sense of life’s old story,” in the words of critic Joan Acocella. Instead, there was a company of uniquely talented men and women, dancing in the long shadow of Balanchine and through the aftermath of the scandal surrounding recently resigned director Peter Martins. And I thought they danced beautifully.

The company performed five ballets: three choreographed by Balanchine (Divertimento No. 15, Tschaikovsky Pas de Deux, and Symphony in Three Movements); one by Peter Martins (Zakouski), and one by Justin Peck (Pulcinella Variations). The Kennedy Center Opera Center Opera House Orchestra, conducted by Daniel Capps, accompanied the performances. Each was loveable — Divertimento No. 15 for combining precise footwork with easy, graceful port de bras, each ballerina fascinatingly juxtaposed with herself. I loved Zakouski, a lighthearted duet between Indiana Woodward and Roman Meja, for its playfulness. As the pair bowed, I said to my friend beside me, “I really liked them,” as if they were funny, entertaining friends who had dropped by. I thought Pulcinella Variations was wonderfully exuberant, and Symphony in Three Movements wonderfully strange.

“…the strength of “Works by Balanchine, Martins & Peck” was not the dancing, the vivid costumes, or dancers’ endearing smiles, but something much less sexy: the pacing.”

But to me, the strength of “Works by Balanchine, Martins & Peck” was not the dancing, the vivid costumes, or dancers’ endearing smiles, but something much less sexy: the pacing. By pacing, I mean the rhythm and speed at which a performance unfolds, dictated by the order of the individual ballets. For a show that lasts over two and a half hours, pacing is important.

The opening number, Divertimento No. 15, is a more traditional ballet with tutus and Mozart; it’s an intricate ballet that takes concentration to appreciate, like a Russian novel, beautiful but dense. By placing Divertimento No. 15 at the beginning, the NYC Ballet capitalized on our initial enthusiasm at settling into a show. In the middle, when we could have become restless, the company engaged us with Pulcinella Variations, a series of solos and duets by dancers in technicolor, zigzagged, and checkered costumes.

The final dance, Symphony in Three Movements, was weird enough to hold our attention, even late in the evening. The curtain opened upon a diagonal row of ballerinas in matching off-white leotards and high ponytails, jerking their arms back and forth. Men in black pants and three ballerinas in pink leotards and scrunchies (Lauren King, Savannah Lowery, and Tiler Peck) joined them. Set to the strange, pulsing music, Symphony in Three Movements felt like being in a 90s aerobics class in a dystopian world — perhaps too odd for an opening, but perfect for a punchy end.