News: An Experience to Remember at the March for Our Lives Rally in DC 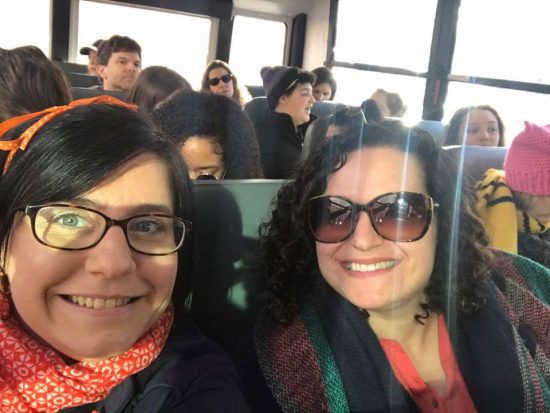 Kristen Price with Jennifer S. on a bus headed to March for Our Lives rally in DC. Photo by Kristen Price.

It’s hard to put into words how I feel about the March for our Lives on Washington. It is the largest rally I’ve ever been to and it was in protest of an issue I feel most strongly about. Watching this event – run for the most part by students under the age of 18 – gave me hope. I was blown away by their poise and their passion. I can’t imagine speaking in front of a hundred people, let alone a million. But that’s what these young adults did effortlessly. It truly was a phenomenal display of what these kids have been trying to accomplish. And though, it may sound slightly overboard, I truly believe that the young adults that planned and participated in the marches, and took to the stage with their impassioned pleas, will most definitely change the world for the better.

Each speaker was affected in some way by gun violence – whether as a survivor of a mass shooting, or the family member of someone that was killed by someone with a gun. It was a stark reminder just how prevalent and frighteningly commonplace guns are in the United States today. Though because of what these students have endured, they chose to stand up and fight for a cause they believe in. It was almost as tough to hear the speakers share stories of the friends, family members, and neighbors they’ve lost and just how much they missed them, as it was for the speakers to share.

One of the most inspiring speeches of the day was made by an 11-year-old girl – Naomi Wadler. As a young African-American woman, she spoke of what made her different and how she and so many other young African-American women know that the issues that are affecting their lives aren’t being talked about nearly enough. It was as heartbreaking as it was inspiring. Another young speaker, Yolanda Renee King, Martin Luther King’s granddaughter also captivated the audience with her simple message – “We are going to be a great generation.” She was surely channeling her grandfather’s message of hope, as well as his passionate public speaking skills.

Other speakers included students from Columbine and relatives of Newtown, Connecticut students. They attended the march in solidarity with the students of Marjory Stoneman Douglas. These young adults are part of a club that no one person wants to belong to. Yet these students know too well what each may be dealing with. That support and dedication will allow these students to flourish and keep up the fight. 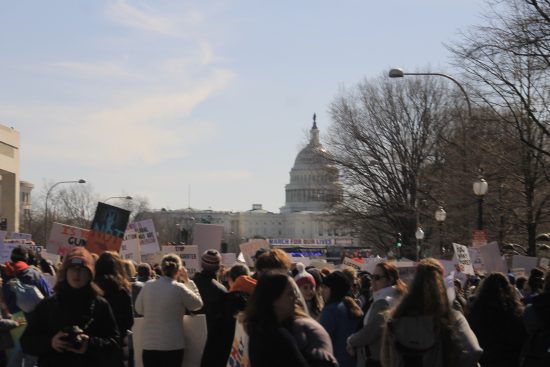 March for Our Lives in DC. Photo by Kristen Price.

Young adults from South Los Angeles, Chicago, Washington DC and other cities across the United States were also on hand to speak to the crowd. These students knew first hand what violence can do. One young man spoke about his twin brother’s murder at just 16, while another young woman spoke about her brother’s death when she was just 5 years old. She heard the pops of the gun – which she thought were fireworks. These stories of gun violence are overwhelming in their commonness yet, they served to empower these students to fight so that no one else needs to endure the losses they have endured throughout their lives. What really sent this point home, was Emma Gonzalez’s fearless speech. As a survivor of the Parkland shooting, she’s become one of the faces of the movement. After reading aloud the names of the students that died in the shooting, she stood stone-faced and silent, with tears in her eyes for the remainder of 6 minutes and 20 seconds – the time it took the shooter to murder 17 of her classmates that. I can’t imagine the guts it took to stand there silently with 1 million sets of eyes on her. The girl is a fighter and I have no doubt she will succeed in her mission.

The losses the students spoke of were backed-up by terrifying statistics broadcast in videos shown between speeches and performances. Facts included the number of mass shootings that have occurred since the assault rifle ban was lifted in 2004, and the amount of money the NRA hands out to politicians on a yearly basis, among others. The most heartbreaking number was $1.05. One can find this number if you divide the amount of money that Marco Rubio (Florida Senator) took from the NRA last year by the number of students in Florida schools. It would seem each student’s life was only worth $1.05 to Senator Rubio. These young adults were there to tell Senator Rubio, and all senators and congressmen, that their lives are worth so much more than $1.05. 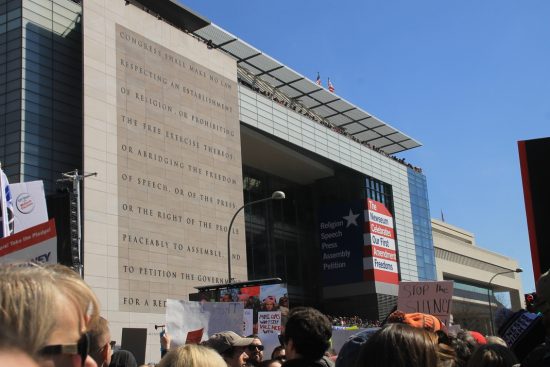 March for Our Lives in DC. Photo by Kristen Price.

Other videos included messages of support from outspoken advocates for gun control. Malala Yousafzai spoke of her ordeal and her work fighting for stricter gun laws. She shared her support for these students and vowed to stand alongside them in the fight. Combat veterans, who used automatic and assault weapons as members of the military spoke about the power and destruction of these weapons. They also agree that these particular guns have no place in the hands of civilians.

Added to the speeches and the videos, there were performances by artists that support the cause. The day began with a beautiful performance by Andra Day and Common who were backed by the Cardinal Shehan School choir from Baltimore. Later, performers such as Miley Cyrus, Demi Lovato and Vic Mensa sang to the hopeful crowd. Lin Manuel Miranda and Ben Platt were also on hand to perform their single “Found/Tonight.” Throughout the day, we witnessed many “Hamilton” lyrics on protest signs, so this performance was clearly one that the crowds were waiting for. What’s great about these two men is that they don’t just talk the talk. Neither needed to be there. They had already released the single in support of the march. Yet they both showed up, and based on the social media posts tagged with their names, they spent the day chatting with marchers and organizers and supporting a cause they believed in. Between the students who organized these marches and the supporters like Lin and Ben and a host of others that are backing them, the children of today have some pretty great role models!

After almost 3 hours of simultaneously angry (at the politicians who are doing nothing) and hopeful (for the students that plan to change the world), the day ended with a gorgeous rendition of Bob Dylan’s “The times they are a changing” by Jennifer Hudson, backed by the organizers and the speakers of the march. The performance was a pitch-perfect reminder that with the work these young adults are doing, the times will change – for the better. I’d say we’re in fantastic hands. 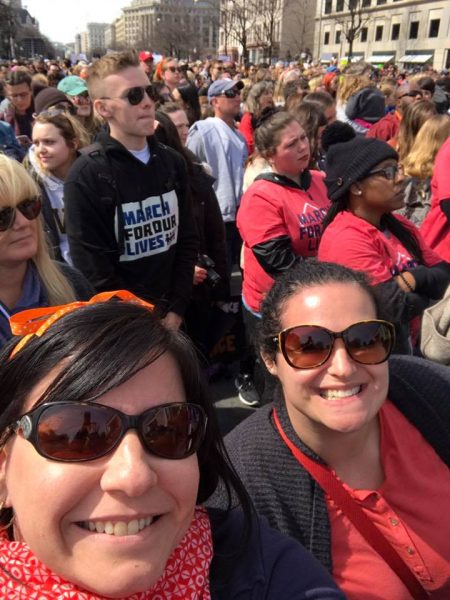 At the end of the day, we are exhausted but our hearts are full of hope and love for these young adults that are literally changing the world! Thank you #MarchforourLives! #NeverAgain ❤