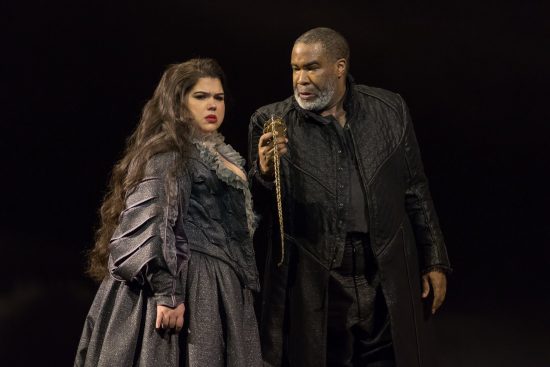 The Washington National Opera, in collaboration with Opera Philadelphia and the Minnesota Opera, has mounted a new production of Giuseppe Verdi’s dramatic masterwork “Don Carlo,” that is a convincing musical success, if a bit visually underwhelming. Anchored by the dependably sublime playing, particularly when under the baton of Philippe Auguin, of the Washington National Opera Orchestra and topped with some terrific vocal performances from a large ensemble cast, this new production is amply worthy of the nearly sold-out crowd that attended the opening this past Saturday night.

…this production at the Washington National Opera is well worth a visit.

The vision presented by director Tim Albery is light on the conceptualization and adheres to the drama as laid out in the original music and libretto. The title character, while not always a believable would-be hero, serves as the axis around which multiple emotional and political struggles are spun. The plot influence of the Spanish Inquisition is downplayed, but there is plenty of drama to be found in the interactions of the characters. Some will be unhappy with the liberty taken at the close of the final act.

The set by Andrew Liberman is visually engaging. An elevated and slanted stage is boxed by geometric shapes and openings that create a versatile space, particularly when employing the use of lowered cage-like walls that create layers of separation. The lighting is a bit dark, but does not detract and fits the mood. Similarly, the costuming feels appropriate for the period but does not necessarily enhance.

The large cast shine individually and often play quite well together. Though there were standouts, you could not say that any of the links were less than up to the job. In the leading roles, Russell Thomas (Don Carlo) and Leah Crocetto (Elisabeth of Valois) are convincing in their dramatization as well as their vocal abilities. Thomas’ tenor is warm and nimble while Crocetto’s soprano shows restraint and measure in knowing when to unleash – making those moments quite effective.

The supporting characters were fantastic and none more so than Jamie Barton as Princess Eboli. Even when not the center of attention, she commanded a significant presence on stage, balancing a clever comedic touch with a slow-played scheming, adulterous motive. Her instrument is one that wows in its power and agility. Most impressive was the deft control she possessed over such a force that was wielded as a conduit of artistry rather than brutality. Her performance was a joy from start to finish.

Quinn Kelsey’s (Rodrigo) lyrical approach was another highlight that shone especially in his ensemble pieces. As King Philip II, Eric Owens was frighteningly convincing in his dramatic portrayal of a ruler whose scorn can be quick and unpredictable. So much so that in one moment it even felt dangerously daring of Maestro Auguin to be so bold as to offer up cues!

The work of the chorus, prepared by Steven Gathman, cannot be overlooked for how well-prepared it was musically and logistically. The large group moved deftly on and off the stage when large forces were needed without adding any cumbersome lag to the momentum. Their singing was remarkably unison and paid dividends toward the classic big Verdi moments.

Whether for the spectacle of Verdi at his best or for the solid musical performances (one of the final collaborations of maestro Auguin’s tenure), this production at the Washington National Opera is well worth a visit.

The Washington National Opera’s production of “Don Carlo” runs through March 17th at the Kennedy Center. Tickets and information for performances can be obtained here.