Theatre Review: ‘All In The Timing’ at Silver Spring Stage 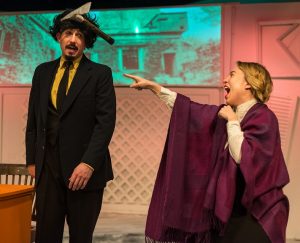 Michael Reilly and Brianna Goode in “All in the Timing” at Silver Spring Stage. Photo by Harvey Levine.

David Ives first came to the attention of many theatergoers with his “Venus in Fur” eight years ago or with his adaptations of Pierre Corneille’s “The Liar” and Jean-Francois Regnard’s “The Heir Apparent,” which made their premieres at the Shakespeare Theatre Company shortly thereafter. But Ives has been writing plays for nearly half a century, and first gained renown for short works of witty wordplay that he produced in the 1980s. Six of these one-acts have been performed as “All in the Timing” since the mid-1990s, most recently in a delightful production just ended at Silver Spring Stage.

“All in the Timing” is simply a giddily enjoyable production, another credit to the always impressive Silver Spring Stage.

If there is a common thread in the sextet, it is “Words, Words, Words” — which is the title of the first. Here, three monkeys sit at typewriters in a sterile laboratory, incarcerated until they accidentally produce “Hamlet.” The problem: none of them knows what “Hamlet” is. It’s a cute piece, but it’s the weakest of the set. Ives’s peculiar brand of linguistic absurdity emerges more strongly in the rest, and the Stage’s impeccably selected ensemble cast then gets to shine.

In “Variations on the Death of Trotsky,” the Bolshevik exile seems unaware that the mountain-climber’s axe embedded in his skull means that he has been assassinated, until his wife, Mrs. Trotsky, points out the relevant encyclopedia entry. Michael Reilly and Brianna Goode frenetically parody melodrama to great effect.

“The Universal Language” is arguably the most complex of the plays, and the biggest challenge for the actors. Omar LaTiri’s Don teaches the newly invented language of Unamunda to Erin Schwartz’s Dawn, and both must deliver the bulk of their lines in a tongue that is simultaneously absurd and exacting. LaTiri is charged with offering up a lengthy monologue of very specific nonsense, and deserves credit both for his diligence and his delivery.

“The Philadelphia” finds a young man trapped in an unpleasant pocket of reality where nothing goes as he wishes, named for that benighted city, while his best buddy enjoys a carefree “Los Angeles.” It’s one of the frothier parts of the show, well-performed by Matt Bannister, David Dieudonne, and Rebecca Shoer.

Bannister, Goode, Reilly, and Schwartz return for “Philip Glass Buys a Loaf of Bread,” an uproarious fantasia in which that avant-garde composer tries to perform a mundane task. Choreographer Aly Cardinalli has crafted movements for the actors that are both humorous and quite lovely.

The program closes with “Sure Thing,” in which a flirtation between Dieudonne’s hapless Bill and Goode’s wary Betty plays out in multiple timelines. Like “The Philadelphia,” it’s a lighter piece, carried by the charm of the actors.

While “All in the Timing” is very much about its writer, any one of the six pieces would flail without the right inflection and interaction and, yes, timing. Director Rob Gorman selected his cast expertly, and they work as a perfect unit. Gorman and Cardinalli also bring their own vision to the production with interstitial dancing and coordinated movement that builds a flow between the six discrete plays that might otherwise not be evident. Leigh K. Rawls’s set design cleverly integrates objects from each of the plays against solid white, providing a sense of the many worlds of the production without being obtrusive.

“All in the Timing” is simply a giddily enjoyable production, another credit to the always impressive Silver Spring Stage.

[Full disclosure: I have worked with Silver Spring Stage as a performer, but not with this particular director or artistic team.]