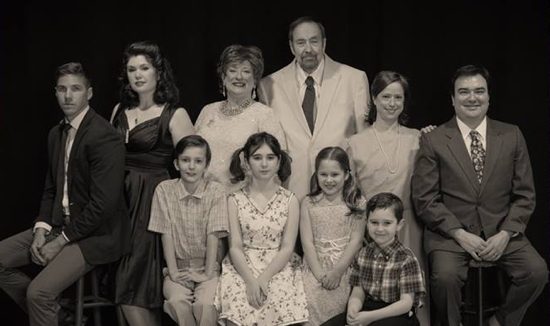 The cast of ‘Cat on a Hot Tin Roof.’ Photo courtesy of Reston Community Players.

Most theater-goers are familiar with Tennessee Williams’ “Cat on a Hot Tin Roof,” with its oh-so-memorable characters—Maggie the Cat, Brick, Big Daddy, Big Mama, Gooper and his wife, Mae. As directed by Sharon Veselic, most of the action in this version takes place in Brick’s and Maggie’s bedroom, and the gallery it backs onto. This has the effect of providing a physical sense of claustrophobia which embodies the secrets this family hold. The Reston Community Players bring new perspectives to this often-revived play.

Act 1 opens with Maggie (Susan Smythe Robertson) stalking into the bedroom she shares with her husband, Brick (Jonathan Blansfeld), who is barely visible behind diaphanous drapes taking a shower. She needs to change her dress because her brother-in-law Gooper’s (Andy Gable) and his wife Mae’s (Cara Giambrone) children have ruined her dress at the 65th birthday/dinner party for her father-in-law, Big Daddy (Al Fetske). Brick had not attended, as he was on crutches, and drinking, and this just adds fuel to the marital fire.

This is a family of secrets and spying on each other and sniping and outright warfare. There is also plenty of smarm to spread around because since Big Daddy (dying of cancer) and Big Mama (Gayle Nichols –Grimes) are rich, the two sons, Brick and Gooper, and their respective families are there not only to celebrate the patriarchal birthday but to curry favor with the source of the money. Even Doc Baugh (Adrian Vigil) and the Reverend Tooker (Richard Durkin) end up agreeing to mendacity because Big Daddy and Big Mama are being kept in the dark about his cancer. Brick, however, throws a wrench into that scheme by telling Big Daddy, and later Big Mama, the truth; he may be an alcoholic, but he seems the only character capable of facing and telling any kind of truth.

In an effort to update the work a bit, Lacey, played by Roin Lynn Reaves, sings the audience into Act 1 and also closes the play with the same spiritual; her voice soars as the one true thing in that decaying plantation setting.

The cast does an amazing job with the deep South accents–we are told several times in the play that this plantation is “28,000 acres of the richest soil in the Delta.” As Gooper, Andy Gable has a moment in the second act when the good ole boy and dutiful son act is stripped away and he physically seems to grow menacing as he barks at his wife, “shut up.” As Mae, Cara Giambone’s abrupt silence and small recoil back ring true and you can see just how much Big Daddy’s son this rather overlooked man is. It’s a telling, subtle moment, one of several in this interesting revival.

The set designed by Matt Liptak adds to the feeling of distrust and secrets—it is a relatively open design with the aforementioned diaphanous draperies, pale furniture, and French doors that open onto a gallery that runs the length of the house overlooking hills and a river, and yet the “walls have ears” as several characters reiterate. Brick may well have found the only way to keep a secret—stay drunk and silent.

Running Time: 2 hours and 30 minutes with one 15 minute intermission.