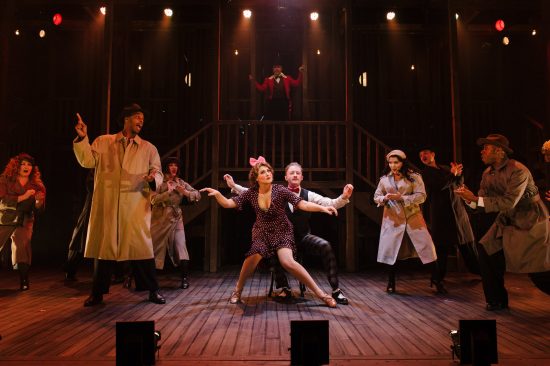 When “Chicago” comes to town, you just want to sit down, strap in, and prepare yourself for an experience. One of the most successful musicals in theatre history, it chalked up six Tony Awards and was the second longest running show on Broadway. Along with that is the successful movie and loads of swag piled on. No pressure, Keegan Theatre…

Good news for the all those jazzers in the audience! Keegan took this landmark show, and–even in their smaller stage–has kept the power and intensity of the show intact. “Chicago,” with its outrageously challenging dance sequences, stylized, larger than life characters and the tongue in cheek breaking of the fourth wall is one of a kind. And with the nice touches given by the directorial team of Susan Marie Rhea and Mark A. Rhea, still holds up well. The song and libretto by Bob Fosse surprisingly feels as sharp now as when created and reflects that certain sophisticated cynicism that was the rage in the 1970s.

The female-driven double murderess song and dance is a romp through the corrupt prison and court systems of the 1920s, and the book is based on actual events. As crafted by Kander and Ebb, it was a series of vignettes about larger than life figures from the flapper era, so they gave a rollicking vaudeville feel to it, in its scenes and in its vamping music choice. One almost expects a calliope playing. The saga of charmingly unrepentant prisoners Roxie Hart and Velma Kelly plays out as if in a speakeasy.

After Roxie offhandedly shoots her lover (who is dismissively walking out on her), she shows us her teasingly sultry best in “Funny Honey,” splayed on a piano, a temptress explaining to her husband what happened. Maria Rizzo’s turn as the cunningly crazed Roxie is a tour de force, capturing the audience time and again with her naughty nuance.

Her self-absorbed character of a downtrodden wannabe who trades up in boyfriends results in great plot setup.  Songs like “Me and My Baby,” and “Roxy” were funny and compelling, showing an extensive emotional range. Teamed with fellow inmate Velma (Jessica Bennett) their continued rivalry heats up the musical numbers and fuels the show. Bennett, the more amenable of the murderers, teamed nicely with Rizzo, especially in the final dance numbers, lending a fine belt and exuberance.

Keegan taken this landmark show, and-even in their smaller stage–has kept the power and intensity of the show intact.

The rest of the talent is top shelf. Keegan vet Kurt Boehm, makes a grand entrance and slick, cold-hearted lawyer Billy Flynn, who gracefully croons his way like a carnival barker, crafting his client’s victories. Numbers like “All I Care About Is Love,” which ended in a Zeigfield-like dance of hand-held fans, and the showstopper “Razzle Dazzle,” a visual manual of how to control the courtroom were crowd pleasers.

Ricki Howie Lacewell lends her pipes as the jail matron Mama Morton, a motherly gatekeeper for the female jailbirds. She had easy power as she struts her stuff onstage and played it less gruff than usual.

Michael Innocenti brings us the woeful character or Amos, the naïve, husband that Roxy tries to manipulates to get her out of jail. He engenders laughs as well as tears in a terrific rendition of “Mr. Cellophane” lamenting his chronic invisibility. A costumed Chris Rudy plays the iconic role of reporter Mary Sunshine nicely.

Choreographer Racheal Leigh Dolan, whose work is seen at many DC venues, has taken Fosse’s alluring and iconic dance style and reimagined it for this space with tight precision, especially in “Cell Block Tango” as the girls in prison explain how sensible they all were in killing the ones they loved.

The show is a testament to the power of the music and libretto, which succeeds without big sets and scenery.  ”Chicago” is a guilty pleasure challenging our conscience—a cold, heartless musical that is successful in producing outstanding theatre.

I’m not sure if crime still pays, but it is certainly worth the price of a ticket.

Running Time: One hour 45 minutes and one 15-minute intermission.