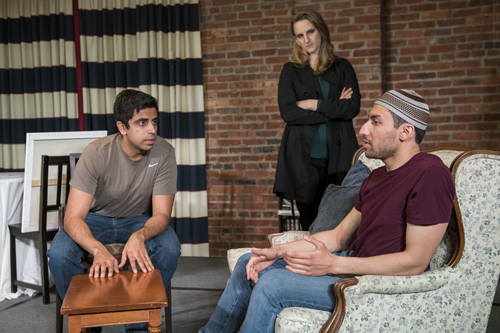 It begins innocently enough. An up-and-coming artist Emily is sketching her husband Amir for a portrait in their apartment on the Upper East Side of Manhattan. Although the work in progress is inspired by the stately painting “Portrait of Juan de Pareja” by Spanish master Velázquez, in reality, the current subject is standing in his socks and boxers dressed in crisp corporate attire from the waist up, trying to figure out why his wife would want to depict him as a slave. The exchange provides a subtle look at the tense cultural clashes and misunderstandings to come in “Disgraced,” the powerful Pulitzer Prize-winning drama by Ayad Akhtar and the latest production presented by the Compass Rose Theater.

No matter your faith or political inclination, there are tremendous lessons to learn from this phenomenal show.

Brilliantly directed by James Bunzli, “Disgraced” is an intense, complex work that explores issues of identity, assimilation, appropriation, persecution, inner conflict and ultimately human connection. The outstanding cast of five is seriously convincing, each bringing the beliefs and personalities of their characters simmering to the surface.

At the center of it all is an upwardly mobile, mixed couple—Emily, a Caucasian artist who admires Islamic traditions played by Katie Wicklund and Amir, a Pakistani-American attorney played by Par Juneja, who dismisses his Muslim faith and dreams of making partner and seeing Kapoor added to his law firm’s name one day.

Speaking of names, enter Amir’s nephew “Abe,” who switched it from Hussein to fit in better and face less discrimination post-Patriot Act. The young man, passionately played by Joe Mucciolo, is actively involved in his community and seeks his uncle’s assistance in helping an imprisoned imam who he believes is being falsely accused of financing terrorist groups. Reluctantly, Amir shows up at the trial only to have his participation reported in The New York Times, a controversial move that eventually costs him his career and perhaps more.

In the middle all of this mess, Emily and Amir invite over another couple for dinner. Isaac, a Jewish-American art dealer played by Sam Midwood, and his wife Jory, an African-American attorney and Amir’s colleague played by Aunye’ Boone. After some light pleasantries, the group breaks bread over religion and politics, bringing up everything from the Quran to the Talmud, September 11th, as well as jaw-dropping revelations such as Emily and Isaac having an affair, and Jory being named partner instead of Amir. Ouch. As the tension escalates, hidden emotions and even uglier things emerge, leaving everyone skipping the dessert from Magnolia Bakery to defend themselves.

In the end, “Disgraced” is really about everyday people just trying to figure out their place in this world. No matter your faith or political inclination, there are tremendous lessons to learn from this phenomenal show.

“Disgraced” runs through March 25, 2018, at Compass Theater’s temporary location at the Powerhouse Building at the Loews Hotel at 126 West Street in Annapolis. For tickets and information, visit here.