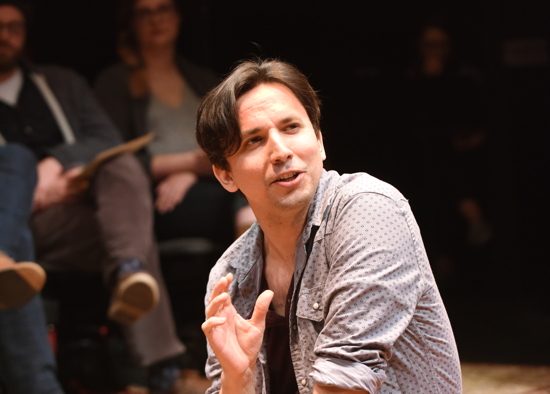 Alexander Strain as The Narrator in ‘Every Brilliant Thing.’ Photo by Stan Barouh.

This is the start of the list that the character of Duncan Macmillan and Johnny Donahoe’s play “Every Brilliant Thing” makes for his suicidal mother. The goal was to make a list of all of the wonderful things that make life worth living. The result is a truly brilliant one-man show that takes the audience on a journey through life and death.

This piece of theatre is valuable and timely.

The list of brilliant things started when the character was 7 years old and his mother tried to kill herself. He continued with the list on and off throughout his entire life. It was the love of music, specifically the Blues and Ray Charles, that connected him to his parents. When he went to college and fell in love, things changed but the list continued to grow.

The audience’s guide on this one man journey is the incredible Alexander Strain. Strain has a rare gift of being able to connect with audience members in a way that makes them feel as if he is just having a conversation with them. He is dynamic and the audience truly can’t take their eyes away from him. He is also welcoming and understanding. Just as much as the audience supports him, he seems to support the audience. Individuals can’t seem to resist when he makes eye contact and says “I’m going to get you to be the vet,” or whichever character he needs help with.

That being said, there’s audience participation in this show! Not the kitschy kind. Some audience members simply say one thing, some get up and play a role, some don’t say anything but all are actively participating in this story. “Every Brilliant Thing” is performed in the round and the house lights stay up the entire time. In the end, there was a sense of solidarity amongst the audience members. Because we had all been through this journey together and were able to see each other the whole time, we felt closer.

The show handles depression and suicide in an educational way without being too philosophical or preachy. It offers support and resources for individuals.

“Every Brilliant Thing” has a very serious subject but the show has some delightfully humorous moments. We get to see the main character grow up, fall in love, and wrestle with their emotions.

This piece of theatre is valuable and timely. I don’t think that there will be another production like “Every Brilliant Thing” this season. Make sure to see it while you can.

“Every Brilliant Thing” runs at the Olney Theatre Center through April 1. For tickets and more information click here.