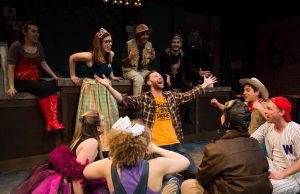 The cast of “Godspell” at NextStop Theatre Company. Photo by Lock and Company.

“Godspell” has been an American theatrical mainstay for so long that it’s easy to forget just what a strange show it is. It has no linear plot, no particular setting in either time or space, and an ensemble that frequently shifts roles, sometimes within the same scene. And unlike its more cynical older sibling, “Jesus Christ Superstar,” this musical imagining of the ministry of Jesus of Nazareth is entirely sincere.

Magee’s production is ideal for someone new to “Godspell”…

Because of its relentlessly positive Up With Apostles tone, its colorful costumes, and its usual clown motif, “Godspell” has become a bit of a joke in popular culture, the show that the theatre kids or the local amateur troupe are always working on. It’s easy to dismiss as a relic of the ‘70s. But in the new production at NextStop Theatre Company in Herndon, director Lorraine Magee cleverly places “Godspell” in a modern context.

Magee sets this “Godspell” in a modern chain coffee shop cutely called “Holy Grounds.” Scenic designer Jack Golden has laid out two-top tables and comfy chairs and couches surrounding a long counter. At the start of the show, the cast is assembled, but each one might as well be alone — all are entranced by their devices. The cacophonous “Tower of Babble” plays out in texts and tweets and status updates; to get everyone’s attention, John the Baptist just pulls the plug on the WiFi.

When Jesus arrives on the scene, the colorful costumes come out as this group of bitter moderns is transformed into a gaggle of disciples. But there are no clown wigs or Superman T-shirts (the Wonder Woman top donned by Chani Wereley is nice wink at both that traditional outfit and at how times are changing) — costume designer Maria Bissex keeps the original’s sartorial spirit with whimsical selections that don’t go so far as to look like a kindergarten Halloween parade.

The energetic ensemble speeds us through the Gospel’s Greatest Hits — the “Good Samaritan,” the “Sower of the Seeds,” the “Prodigal Son” — in the manic first act, working in some modern touches like freestyling and the viral hit “Cups” song. When the cast returns for the more somber second act, the childlike motif of “Godspell” becomes most effective: The disciples cannot fathom Jesus’s coming departure any more than a small child could imagine that of a parent. Angeleaza Anderson is particularly successful in registering this shock during the haunting Last Supper number “On the Willows.”

NextStop has paired this production with its next, Joshua Harmon’s “Bad Jews,” to display “how the teachings and principles of God have both illuminated the very best of human nature and been used to justify the very worst.” While the simplicity of “Godspell”’s message is unlikely to win converts among those seeking deeper theological answers, NextStop has mounted a version of this old standard that avoids becoming saccharine. Magee’s production is ideal for someone new to “Godspell” — or for those who have seen it and thought they would have no reason to ever do so again.

Running Time: One hour and 50 minutes with one intermission.