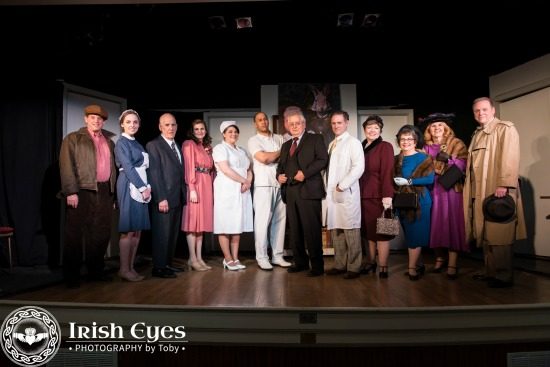 The cast of ‘Harvey.’ Photo courtesy of McLean Community Players.

Playing like a screwball comedy with supernatural elements thrown in for good measure, Mary Chase’s award-winning comedy “Harvey” has returned, filling the Great Falls Grange with laughter. The McLean Community Players (MCP) have also returned to their roots since the Great Falls Players – a predecessor to MCP – was founded at the Grange and produced “Harvey” three decades ago.

‘Harvey’ lives up to its zany and heart-warming reputation as a classic.

During the current season, the McLean Community Center is undergoing extensive renovations. Throughout the year, MCP is using various area venues, including the venerable Grange, located off of Georgetown Pike. While not as spacious as the Arden, the Grange is a perfect setting for the 1940’s setting of “Harvey,” complete with wood-paneling and an intimate proscenium stage that the production used to its full advantage.

For classic movie buffs, “Harvey” is well-known through as a starring vehicle for the great James Stewart, but the stage version has been a staple of theaters large and small since it premiered in 1944, winning the Pulitzer Prize for drama. A decidedly light entertainment, “Harvey” does not pretend to be anything other than vehicle for delightful escapism, which was as timely at the end of World War II as it is in our current times.

In the play, we meet Elwood P. Dowd, the affable, small town bachelor whose best friend happens to be a (mostly) invisible pooka named Harvey. For those not up on their Gaelic lore, a pooka is a supernatural being who takes the form of a rather large animal. Allegedly Harvey is a white rabbit well over six feet tall. We take Elwood’s word for it, which is part of the charm of Chase’s whimsical script. Other characters do not immediately embrace the idea of an tall white rabbit seen only by his friend, hence the screwy situations of the play.

As lovingly directed by Eleanore Tapscott, with many clever touches along the way, “Harvey” lives up to its zany and heart-warming reputation as a classic. Tapscott keeps the pace brisk and her game cast keeps the energy high along the way to present a lively rendering of the play. Leading the company with quiet and understated dignity and charm is Kevin Dykstra as Elwood. Dykstra nails Elwood’s lovable demeanor and childlike wonder infectiously. He makes the idea of his invisible rabbit pal all the more believable with his easy going stage presence.

By contrast, his put-upon but loving sister Veta Louise Simmons is played with zest by Anne Hilleary complete with that unmistakable Transatlantic accent that was favored by stage and screen stars for many years that combined elements of standard American speech with British Received Pronunciation. (Think of Kate Hepburn or FDR, that old, upper crusty sound that made “father” sound like “fathah.”) Several of the character actors in MCP’s “Harvey” also use this type of speech production and it was a wonderful directorial detail to place the play in the time period. Hilleary’s character is also focused on being a society matron, so it was more than fitting she would adopt the sound, to keep up appearances, Hyacinth Bucket-style.  Veta’s problem is her brother Elwood unknowingly ruins her chances at social climbing as well as handicaps niece Myrtle Mae’s life as an eligible young debutante. When Veta and Myrtle Mae – played by Caroline Peterson – decide to commit Elwood into the local sanitarium, the comical stakes start to rise.

Elwood and Veta end up at Chumley’s Rest home and the staff of the psychiatric hospital have a pooka of a time pinning down the real patient. Elwood charms lovely Nurse Kelly, who is played by the gifted comedienne Amanda Spellman. Veta’s histrionics convinces young doctor Lyman Sanderson she is the nut to be cracked. Michael Himes makes for a dashing Dr. Sanderson. As the would be patients dash in and out of the rest home, head head shrinker Dr. Chumley, played with blustery aplomb by Bob Thompson, struggles to make a proper diagnosis. The play really sails along when the ensemble plays the big scenes and mines the comic potential out of the situations.

Oh, yes, Harvey does make “an appearance” or two during the performance so you, too, might be a believer. At least you’ll get a kick out of how the clairvoyant rabbit makes his presence known.

Another clever hallmark of MCP’s “Harvey” is what happens in between the scenes. Given such a small stage space, Tapscott was challenged with moving the action back and forth between the Dowd’s home and the sanitarium. Enter technical director George Farnsworth and set designer Bill Glikbarg to devise the two setting modular style where elements are traded out. Tapscott made the scene changes part of the action utilizing members of the ensemble to enter and cut a rug to 1940s big band swing music and cover the transitions. The audience not only enjoyed Mary Chase’s delicious play, they ate up the dance interludes, which were executed with glee by actors Justin Trent, Caroline Weis, Kathleen Donovan, Shayne Gardner, David Adler, and Lou Lehrman.

My one tiny quibble attending “Harvey” at the Great Falls Grange was not with what was happening onstage. Due to using this borrowed venue, the house was arranged with padded folding chairs. Patrons who wish to enjoy “Harvey” might do well to bring an extra cushion to add a layer of much needed comfort where you will definitely need it.

By curtain time, director Tapscott and her company succeed in leaving the audience with not only a sense of whimsy but a reminder that being kind to others, like Elwood, doesn’t cost a cent and leaves other people feeling good – a wonderful reminder for any time.

Running Time: 2 hours and 20 minutes with one 15 minute intermission.

Advisory: Appropriate for all audiences