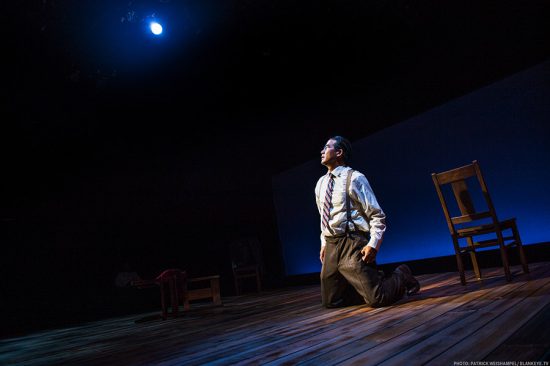 Ryun Yu as Gordon Hirabayashi in Hold These Truths, which runs February 23-April 8, 2018 at Arena Stage at the Mead Center for American Theater. Photo by Patrick Weishampel for Portland Center Stage.

“We hold these truths to be self-evident: that all men are created equal; that they are endowed by their Creator with certain unalienable rights; that among these are life, liberty, and the pursuit of happiness.” Founding father Thomas Jefferson wrote these words in one of the most famous pieces of writing in history – the Declaration of Independence. However, during a dark time in American history, some American citizens were denied these rights, leaving the question of what is “self-evident” up in the air. One man takes you on his journey through these questions in “Hold These Truths,” now playing at Arena Stage.

Ryun Yu plays real man Gordon Hirabayashi, a Japanese-American. He is a Nisei, which is what the Japanese community used to describe the first generation of American born Japanese, born of the Issei, the generation that immigrated from Japan. He grew up in Washington State in the 1930s, very accustomed to seeing signs in the windows of shops saying that people of “his kind” were not allowed. He got accepted to the University of Washington, and while there made a lot of friends from different backgrounds. However, everything changed on December 7th, 1941, a date that would famously “live in infamy.” The Japanese, who had joined the Axis powers, bombed Pearl Harbor and the United States entered World War II. Soon after, the US government started putting restrictions on Japanese immigrants; Gordon told his mother that he would take care of things if they ended up being relocated, but she forlornly prognosticated “Gordon, what they do to the Issei, they will do to the Nisei.” She turned out to be right; soon there was a curfew, and then a mandatory relocation. Gordon decided to defy this order, Executive Order 9066 and refused to comply. This began a long, and fascinating journey for Hirabayashi; a journey to find justice and define himself as an American.

This show is a powerful and heartbreakingly human piece of art.

Hirabayashi’s story addresses several big existential questions; what makes an American? Who decides? And, as Gordon asks at the beginning of the show, – “do we really believe in self-evident truths?” It also deals with some interesting cultural issues. Gordon highlights a saying delivered by his father that sums up a great deal of Japanese cultural approach to things, “the nail that sticks out, gets hit.” This references the often collectivist nature of Japanese culture. You also see how as a Neisei, he struggles against the Japanese cultural influences and his American culture. It also explores the conflict between wanting to fight against injustice and the pacifistic ideals by his adoptive faith of the Quakers. But most of all, it shows the conflict between Hirabayashi’s ideas of his right to life, liberty, and the pursuit of happiness as a citizen of the United States, and the acts of the government that was supposed to safeguard those rights.

The internment of Japanese-Americans is a particularly dark moment in the history of the United States; a moment that is still largely glossed over in our collective historical education. In fact, the first time I had ever heard of this was when the librarian at my junior high school gave me a fictional novel with the internment at the center. Another recent theatrical representation of this topic was a Broadway musical, “Allegiance,” which starred actor and social media personality George Takei, who actually spent part of his childhood in one of the internment camps. These pieces of theatre, and the focus on the injustice of the internment is particularly timely, with some of the events that have been in the news. Stories of immigrants and refugees from certain areas of the world being turned away, houses of worship being vandalized because of the faith it represents, and people being harassed because of the way they look; it would be nice to think that these are things that exist only in the past. However, Hirabayashi’s story highlights how easy it is to throw away the sovereign rights of others in the face of fear and hysteria, and just how dangerous and damaging it is to entire communities.

This show is a powerful and heartbreakingly human piece of art. The exposition provided at the top to fill in Gordon’s world provides a poignant snapshot of a community; a family; a man. Building the audience’s understanding of the life Hirabayashi worked so hard to build for himself only intensified the desolation when it was ripped away. It also helped the audience to understand why he was willing to risk so much to fight for what he believed in. Jeanne Sakata pours an enormous amount of heart and passion into this story, a story that certainly must resonate with her as a Japanese-American herself.

This is a one-man show; all parts are portrayed and the story entirely rests on the shoulders of Ryun Yu. He delivers an absolutely tour-de-force performance, perfectly delivering this complex and poignant story. There are comedic and dramatic moments that sometimes turn on a dime; Yu navigates them masterfully. He also has to switch into other personas throughout the show; his mother and father, his friends, his captors, and finally his advocates. He does this seamlessly – this reviewer was astounded by his versatility. The audience sprung to its feet to honor Yu and his performance at the conclusion.

The technical design of the show was also very effective. The stage was a simple raised, wooden square, with 3 plain wooden chairs. There was a large screen at the back, which reflected color to help set the mood of the changing scenes. The sound design was also particularly compelling, with sounds as varied as baseball and a gunshot transporting the audience. In all, it was an incredibly affecting story that came alive on stage. As a human being, everyone can take something from this story; this reviewer strongly recommends seeing it while it is here in the DC area.

Advisory: Contains profanity, racial slurs, and a gunshot sound effect. Due to these aspects, this show is recommended for audiences 16 and older.

“Hold These Truths” runs now through April 8th. For more information and for tickets, click here.