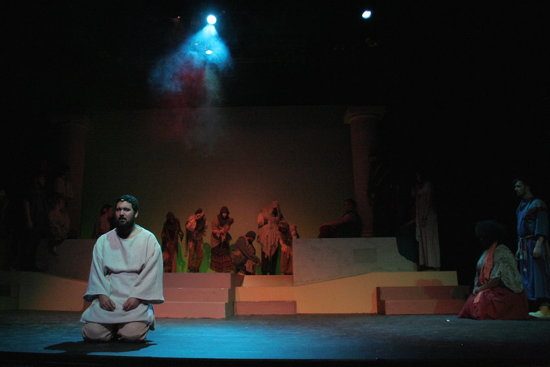 The revival of “Jesus Christ Superstar” by the Port Tobacco Players in their little jewel box of a theatre in LaPlata, MD, is a delight. The depth of the choreography and the tightly controlled blending of the ensemble (pretty much everybody except Jesus is in the ensemble) imbue this work with a fire that is, well, refreshing. The direction by Amy Wathen Cooksey is tight, well-paced, and joyous.

This cast was up to the challenge. They live those parts.

This production gets so many things right—the singing, the dancing, the costumes, the set, the acting, the live orchestra—that it almost seems testy to quibble at a couple of misses. The company had some difficulties with the sound at Sunday’s matinee; it surged a couple of times, cut out completely a couple of times, and at a few other moments seemed thin. The second quibble is that while the Spartan set worked amazingly well, the backdrop looked unfinished. It was a pure white square and the starkness of the white against the desert colors of the rest of the set was jarring. The final note I might mention is that the introduction seemed to go on a bit too long; I could feel the audience starting to get restive around me as the colored lights played out over the white backdrop on the stage.

“Jesus Christ Superstar” is the story of the last few days of Christ’s life, starting with the adoring crowds, the growing perturbation of the Jewish elders and the Roman overlords, to the dinner, betrayal, interrogation, flogging, and crucifixion. It is entirely sung, unlike the majority of musicals, and demands a lot of its cast vocally.

This cast was up to the challenge. They lived those parts. There was joy and hopefulness and adoration on that stage for the first half, and then in the second, the backlash was ascendant. Except for Mary Magdalen (Brianna Crakes), of course; she never wavered in her devotion to Christ. There was also incredible gentleness when she tries to comfort Peter after his thrice-betrayal of Christ in the second act. The purity and clarity of her voice was a benediction in that role.

It was also interesting to see such a physically imposing Judas (John Pierce), particularly as he was at least a full head taller than Jesus (Chad Mildenstein). In one scene where the two confront each other nose to nose, it could have devolved into comedy, but the quality of the acting was such that the audience felt Jesus’s resolve and determination. It was a tense moment, and you could hear a collective breathing out when Judas turns and storms out.

The choreography, by Brooke L. Howells, makes excellent use of the various levels of the deceptively simple set (designed by brothers Jeff and John Merritt). The dancing is, simply put, wonderful. Whether the looser, more flowing dancing in the first act, or the Vegas-style showgirl-dancing in the second, this is an enviably coherent ensemble. The entire cast, whether winding about sinuously on the various levels or channeling the Rockettes, moves as one—and that’s hard to do.

And the singing. As this is a completely sung show, the singing has to be first rate. Even with the few instances of mike difficulties/sound issues, the cast never missed a beat. The entire ensemble was so well-blended that it truly was a joyful noise unto the heavens. It was also an unexpected delight when Chad Mildenstein as Jesus hit and held that note in the temple scene made so famous by Jeff Fenholt on Broadway and Ted Neely in the movie. The discipline, practice and hard work of the entire cast paid off handsomely in the glory of the voices. They are ably supported by the entire live orchestra under the musical direction of William V. Derr.

The costumes, designed and created by Pat Brennan, Cathy Compton and Melody Sciarratta are beautifully made and fall impeccably. Of particular dramatic note are the black costumes of the Jewish elders—they embody tradition and the heaviness and fear of a subjugated peoples.

This is a wonderful production and a delightful way to spend a matinee or evening.

Running Time: One hour 50 minutes with one 15-minute intermission.