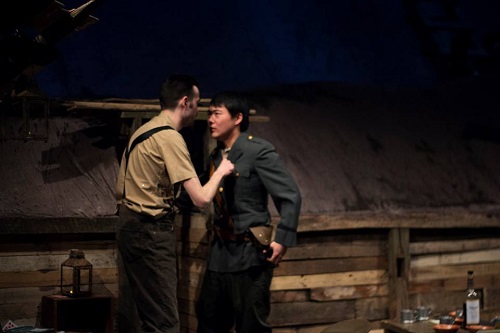 Most of us have a romanticized view of war. We play video games that sport warfare and killing as fun and relaxing. Our culture is soaked in war-related events. Everywhere we go, some group is fighting for some kind of freedom. But what if war isn’t what we expect? What if our culture has given us the wrong idea of the glamour of war? What if we are missing the truth?

R.C. Sherriff sought out to explore questions such as these in his play “Journey’s End,” which is being performed by the College of Southern Maryland’s Performing Arts Company from March 15-17. The story is set in the year 1917, and you find yourself in war-ridden British trenches as World War I rages on around you. As you peel away from the box office and head down the side hallway to the theatre’s backstage door, you can’t help but look up at the walls. A few WWI posters greet your curious eyes, positioned cleverly amongst the featured art displays. They urge you to ‘lend your five shillings to your country and crush the Germans’ and ‘rally round the flag; we must have more men’. The pride that oozes from these posters is beautiful, but also chilling.

““Journey’s End” reminds us all of the frailty of life, the simplicity of life’s complexity, and the strength that hides within us all.”

As you come into the audience seats on stage, which are positioned less than 3 feet away from the end of the set, you really feel like you step back in time. You must greet the king of England on his poster, with a proper English “God Save the King!” Through a dark tunnel, you find your way to the stage and find that even the seats are surrounded by fence posts and sandbags. The set is incredible! Every little detail, down to the mulch on the stage floor as you walk in, simply takes you back in time to the WWI bunker it cleverly portrays. As I sat in my seat awaiting the start of the show, I was simply captivated by the creativity of CSM’s set designer! The raw, exposed edges, the staining of the wood, the use of canvas to create the illusion of the trench; everything is simply breathtaking. The sound effects were spot on, and the lights were cleverly incorporated into the storytelling. Properties added depth and reality to the production. Everything just came together to create an unforgettable theatrical experience!

As an epilogue of incredible history plays around you, courtesy of the sound team, soldiers begin to grace the stage. They are simply going about their daily work: watch duty, drying wet socks, etc…. Not exactly the romanticized guts and glory outlook that most Americans have about war today in 2018. Don’t be daunted by this early action on stage, as it the play really begins around 15 minutes before the advertised show time. I think this is a clever directing choice made by Keith Hight because it helps to set the stage for the advertised show, and really catches the audience off guard. After watching the entire show, I think that the playwright wrote this show in order to tell the truth about war; the horrors the soldiers experience, but also the mundane and everyday life of these soldiers. One will be quite surprised to find that the sound effects of gunshots and explosions even become background noise to you after an hour. What is abnormal to us about war soon becomes so common we hardly stir at the sight or sound of it.

In “Journey’s End,” Captain Stanhope (portrayed cleverly by Thomas Donohue) has just received a new Lieutenant, Raleigh (portrayed delightfully by Chris Lange). The story unfolds as Stanhope and his men spend the four days leading up to a sneak attack on the Germans, and really captures every moment and thought of these young soldiers. Supporting characters Osborne (portrayed with ease by Sean Smith), Hibbert (portrayed movingly by Chris Fleming), Mason (portrayed by Andrew Geier), and Sergeant Major (portrayed effortlessly by Rick Fulton) are just a few of the ‘men’ who took to the stage to help the stories of these everyday soldiers. I state the term ‘men’ in quotations because there are a few women’s names on the cast list, although I didn’t notice them at first because they played the role of a male soldier so well. This cast was well suited to their roles and really became who they were tasked to play.

Perhaps my personal favorite of the men whose stories were shared in this play was Totter (portrayed to perfection by Erik Braun), whose wit and attention to detail in his character simply stole the show! I cannot give him enough praise for the depth of character he created, and he really balanced out the heaviness of the subject with incredible energy and humor. As these men went about their day paroling the trenches and eating their meals, I found myself beginning to feel as though I really was in that bunker, at that table with them. What an incredible thought-provoking experience; to be sitting down to dinner with soldiers who don’t know how much longer they will be alive, and yet they choose topics of gardening and worms as opposed to much heavier conversations.

I really began to wonder what I would be talking about at the dinner table if I was sitting in a bunker with Germans shooting and bombing ground nearby. Would I even be eating dinner? Truly, war is not for the weak of stomach, but as you watch this show you may discover that there is no hero. War changes people, breaks them, wounds them in more ways than one. R.C. Sheriff captures more than just the truth of war in his play. As the hours unfold, so do the depths of humanity and the ties that bind even enemies together.

Sherriff’s genius in this play is expressed well through the composition of the show, and the director’s vision really unmasked Sherriff’s goal for the show. From the start of the show (15 minutes after house opened) to the end, director Keith Hight really captured the ordinary and familiar feel of this production. The conversations Sherriff chose to include are normal, everyday conversations that I can imagine having with my friends and family. Hight chose staging that allowed for a familiarity in the interactions of the actors onstage. My particular favorite directing choice, and possibly a playwright choice too, was the inclusion of mistakes. The soldiers don’t utter their lines as if they are Shakespearean actors. Instead, their conversations mimic the usual grammar of conversations in 1917, complete with misused words and other common mistakes. The first few times I saw this happen, I thought it was a genuine mistake on the actor’s part, but after seeing it throughout the production from more than just one actor, I realized that it might be deliberate. I truly appreciated this choice because I could relate to the characters on stage much better through those mistakes, as I am certainly not perfect with words!

Fair warning, this show is a long one. I have never attended a show with two intermissions before, and they are well timed. Be forewarned, the lights will turn on but the action on stage will not stop. War doesn’t take breaks – it keeps going, on and on. Don’t be turned away by its length, however. This show is a must see! It’s a reality check for all of those who take for granted the time they have on earth. How much time do we really have? Not even this moment is guaranteed. So let us live with the awareness that every moment could be our last, but not let it stop us from enjoying every moment given to us in its fullest. “Journey’s End” reminds us all of the frailty of life, the simplicity of life’s complexity, and the strength that hides within us all.

In all, this show is different from the traditional story told in theatre. The goal of this show was never to tell a fuzzy story, or to make you walk away feeling good. This show intended to capture the mundane, everyday, normal reality of war and leave the audience with a changed idea of the truth behind the uniform. Soldiers are superheroes. They’re just ordinary humans who have gone through inhuman things, and yet somehow are still able to appreciate the beauty and wonder of this world. Without talking directly about it, Sherriff even covers the topic of PTSD in soldiers and the reasons behind it. In all, I’m not sure enjoy is the right word to use when I say I enjoyed this show, given the content, although I truly did enjoy it. Perhaps the best compliment I can give it is that it definitely left me thinking!

Advisory: Some adult language, drinking, and themes of death and warfare. Best suited for high school and up.

“Journey’s End” will be playing at the College of Southern Maryland in La Plata, MD March 15-17. For more show information and tickets, please see here.