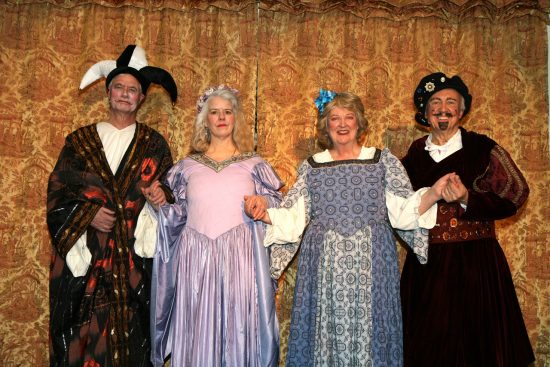 “Youth is a gift of nature, but age is a work of art”- Stanislaw Jerzy Lec. Age and art are on display in the comically charming play “Quartet,” now playing at Kensington Town Hall.

“Quartet” unfolds at a country house for retired musicians in Kent, England. Current residents Reggie (Peter Harrold), Wilfred (John Allnutt), and Cissy (Angela Cannon) are all discussing the upcoming celebration the home presents each year on October 10th, Giuseppe Verdi’s birthday. As former famous Opera singers, they are all trying to decide what piece to perform at the celebration. Things take a turn when Cissy gets news of a new arrival to their home. This new arrival throws a wrench in things, especially for Reggie, because the new resident is famous soprano Jean Horton (Jill Vanderweit) a notorious diva and Reggie’s ex-wife.

The British Players deliver an excellent rendition of this delightful play…

After begrudgingly accepting the idea of performing the quartet from Rigoletto for the Verdi show with Jean in the mix, things get even more complicated when Jean refuses to participate and, when pressed, becomes almost hysterical. This makes Reggie question again, as he has done many times over the years, why Jean retired so very early. And Wilfred and Cissy wonder what made Reggie and Jean’s relationship dissolve into such hostility. These questions are explored, with plenty of laughs and commentary on growing old along the way.

“Quartet” debuted in London’s West End in 1999, but is probably best known for the 2012 film adaptation. Not only did the film star the incomparable Maggie Smith, but also marked the directorial debut of actor Dustin Hoffman.

The British Players deliver an excellent rendition of this delightful play, effectively portraying these characters attempting to “enjoy a dignified and tranquil senility.” Director Matthew Ratz and producers Chrish Kresge and Caroline Gelb did an excellent job presenting a show that can speak to people of many ages. One message that this show grapples with is, how does aging affect our sense of self? Do we become different people as we age? Or just adapt? This production does a wonderful job showing four very different people dealing with these questions, sometimes manifesting as crisis. One of the greatest strengths of this production is handling this journey with dignity, and showing the audience the value of the lessons these characters are learning.

Harrold does a fantastic job portraying the complex Reggie, who is one moment quoting philosophical rhetoric on art, and the next screaming profanity at the woman who withholds marmalade from him. The hurt that he is able to portray piques the audience’s interest in what happened between him and Jean to cause such dissolute feelings between them. Vanderweit increases the audience’s buy-in to this relationship. She also takes us on a journey of development from a self-centered diva who is obsessed with the person she used to be, to embracing her current life and the people around her. Allnutt is hilarious as the lusty Wilfred, starting off the show with a “bang.” He too becomes more layered as the show goes on, helping Jean accept, and then embrace her current circumstances. He delivers the hysterical quip “there’s no shame in charity, if you’re undeserving.” Last, but certainly not least, Cannon absolutely charms as the slightly batty Cissy. Her forgetfulness and confusion frequently causes laughs, but the play also does not shy away from the darker side of these things.

The set is wonderful; they are able to make great use of the space (Set design, Mike Lewis and scenic design by Albert Coia) The first act takes place on a patio, complete with a beautiful, hand-painted, forest scene. The 2nd act is trickier, with multiple different locations being portrayed in a short time- the set is able to adapt admirably. Costumes play a central role in the plot, especially in Act 2, and they are excellently put together (Costume design by Nicola Hoag.) The makeup is also great, especially in the run-up to the big performance at the end of the show (Makeup design by Helen Coy-Gresavage.)

The British Player’s production of “Quartet” is highly enjoyable, with a lot of laughs and heart. Definitely, check it out before it’s gone.

Advisory: Due to some adult language and situations, this production is recommended for audiences 16 and older.

“Quartet,” presented by the British Players, is now playing at Kensington Town Hall. Click here for more information on performances and tickets.