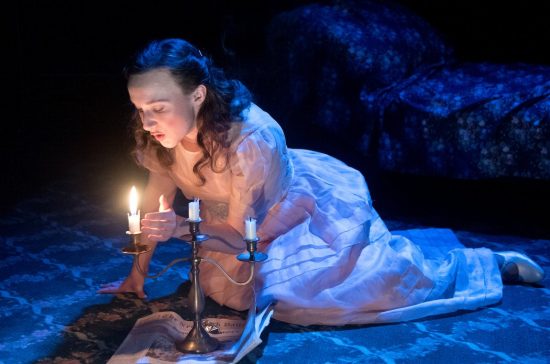 “What are we going to do, what is going to become of us, what is the future?” wonders Amanda Wingfield, the overbearing and over-the-top mother in one scene of “The Glass Menagerie,” the career-defining, semi-autobiographical work by Tennessee Williams currently on stage at the Annapolis Shakespeare Company. Directed by Donald Hicken, this exquisite drama is dark, yet dreamy, and offers a vibrant and touching retelling of the memory play that follows the fate of one struggling family in 1930s St. Louis.

…people have to deal with burden and brokenness as The Annapolis Shakespeare Company does with grace and humanity in their stellar production of  “The Glass Menagerie.”

The fine cast of four beautifully conveys the inner struggles and nuances of their characters. Kurt Elftmann, who is the narrator and son Tom Wingfield oozes frustration and resentment as he deals with family demands and dissatisfaction with his quality of life. Claire Schoonover attracts attention, sympathy as well as occasional laughs as the outlandish but well-meaning matriarch Amanda, a former Southern belle who can’t help but recount her glory days and the swarm of gentleman callers.

In contrast, Laura Rocklyn is gentle and painfully shy as daughter Laura, whose stunted development leaves her alone in her own little world of glistening animals as the Victrola plays in the background. Bringing a gleam of hope to the Wingfield residence is Jim O’Connor, Tom’s co-worker at the warehouse, as well as high school crush and now potential suitor of Laura, played by the charismatic and handsome Benjamin Russell.

Family loyalty is a major theme, but the notion of individual escape is also prominent—Amanda with visions of a better life, Tom and distant lands, Laura and child-like fantasies, and even Jim in his pursuit of motivating the masses. Sadly, escape is not always possible, and these everyday people have to deal with burden and brokenness as The Annapolis Shakespeare Company does with grace and humanity in their stellar production of “The Glass Menagerie.”

Running Time: 2 hours and 10 minutes with one 15-minute intermission.