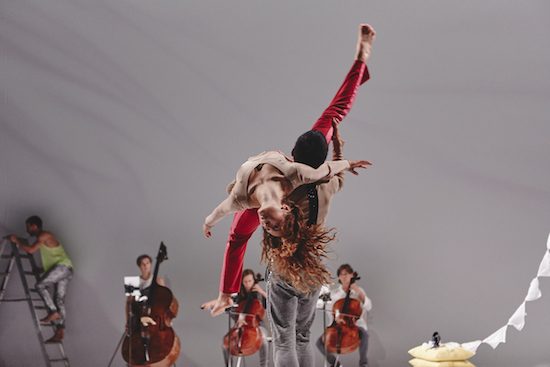 According to legend, Johann Sebastian Bach wrote “Aria with diverse variations for a harpsichord with two manuals” around 1741 to comfort a Russian ambassador suffering from insomnia. The ambassador asked his personal harpsichordist, Johann Gottlieb Goldberg, to play the variations during his restless nights. Thus, Bach’s piece became known as the “Goldberg Variations.”

Andersson Dance and the Scottish Ensemble allude to this history in the opening performance of “Goldberg Variations — Ternary Patterns for Insomnia” at the Kennedy Center. Though the music itself was beautifully played, by the end of choreographer’s Orjan Andersson’s interpretation, I wondered if the drama of the production might not make my insomnia worse.

Andersson brought the musicians on stage with the dancers, his idea being to equalize dance and music, not to prioritize one over the other. This is a lovely idea, and the Scottish Ensemble — 11 string musicians led by artistic director and violinist Jonathan Morton — skillfully played Bach’s complicated work while weaving among the five dancers, even dancing a bit themselves. Not to be overlooked is their courage in freestyling for a Kennedy Center crowd.

Still, the musicians were not dancers. While some seemed to enjoy the spotlight — in one variation, Morton bullfrog leaped across the stage, violin tucked under his arm — others looked uncomfortable, making me feel uncomfortable. In another variation, Andersson had them lay down the instruments and make “music” with their bodies, clapping and stomping and making popping noises with their mouths — an interesting idea but awkward in execution.

…one of dance’s central questions: if we could see the music, what would it look like?

The dancers appeared more at ease trying to answer one of dance’s central questions: if we could see the music, what would it look like? “Goldberg Variations” is a highly nuanced piece; Bach wrote thirty unique adaptions of a single melodic line, similar to a film score composer creating many variations on a musical theme.

Andersson explained in the post-performance discussion that he intended his choreography to mine the riches, the complexity, of the music. Sometimes the performers achieved this. One dancer’s solo during a slower, bluer variation seemed to capture and even magnify the sadness of the sound.

More often, though, the props and costumes and silliness only distracted us from the choreographer’s intention. Halfway through the performance, the performers cluttered the stage with objects —  a ladder, a banner, a stack of yellow pillows, and a squeaky rolling cart, to name a few. Three of them stripped to their underwear. One of them put a pair of shiny pants on her head for several minutes; another dancer put them on properly later. Though these moments gave us a few good laughs, they ultimately obscured the nuance of the music Andersson meant to elucidate.

The most authentic variation of the performance was the last. Only the double bassist, Diane Barry, remained on stage. As she played that single melodic line that inspired all thirty of Bach’s variations, we could, at last, see the music and the kaleidoscopic quality of a simple melody ringing clear.

“Goldberg Variations — Ternary Patterns for Insomnia” played through April 28, 2018, at the Kennedy Center. More information can be found here.