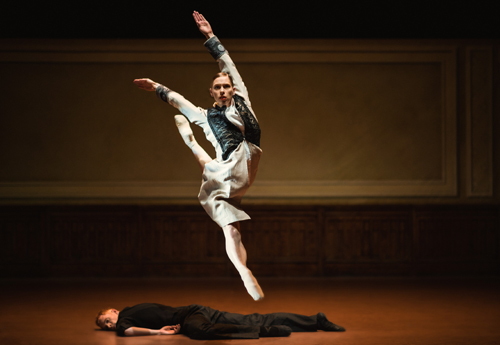 There’s a certain fresh, uninhibited and politically inspired way of dancing that only Europeans manage to pull off. It came into being in the 1960s and continues to crop up now and then, especially in dance performances by Dutch troupes.

For decades now, Holland’s borders have been open to artists from all over the world. The result is an artistic freedom and style that stress adaptability, theatricality, versatility and non-predictability.

…here are dancers who create magic on stage and memories to take home.

“Dutch dance is not encumbered by specific national tradition…we are modern, innovative and cross not only artistic but also cultural and racial boundaries,” commented a member of the Dansgroep Krisztina de Chatel at a Baltimore press conference in the late 1990s. “Challenging the traditional boundaries is key to our work,” confirmed another Dutch dancer, this time from Rotterdam’s Onafhankelijt Toneel at the Theatre Project a few years later.

These were my thoughts as I watched the Nederlands Dans Theater (NDT) perform a trio of works, two to live music by the Kennedy Center Opera House Orchestra. The company made its DC debut to an appreciative audience with “bravos” and standing ovations. Perhaps because it’s been three decades since the company last appeared at Wolf Trap, or that we just need a lift or a jolt to chase away winter blahs, here are dancers who create magic on stage and memories to take home.

During the first intermission, a group of fans talked about the Wolf Trap visit in the late 1980s. Reminiscences of the anti-war opus, Soldiers Mass, by then NDT artistic director Jiri Kylian still linger for many of us who attended that performance.

Current director Paul Lightfoot commented on Kylian and his contributions to the company. He noted that the closing piece, Singulière Odyssée, was dedicated to a deceased dancer, one who had performed in Soldiers Mass. Lightfoot, a former dancer-turned-choreographer/director was passionate when he mentioned his program notes, “I invite artists who can strike a certain atmosphere, emotion, and essence the second the curtain opens.”

And what a curtain-opener Shoot the Moon turned out to be with revolving doors and walls, live cameras in the wings to capture dancers from all angles, and eroticism galore. Choreographed by Lightfoot and his associate Sol Leon, a renowned dancer who worked with Kylian and others who contributed to the long history of NDT.

The story evolves like a black and white painting – think “The Scream,” with five dancers, some alone or together, and a lone figure hanging on a wall. Set to the tinkling score of Philip Glass – kudos to the pianist – it’s haunting and mesmerizing at the same time. Though it’s difficult to point out specific dancers, let’s just salute Myrthe van Opstal, Chloe Albaret, Mame van Opstal, Roger Van der Poel, and Jorge Nozal.

Lightfoot and Leon also created their 2017 Singulière Odyssée, a work that needs a second look before serious criticism. Let’s just say it’s an adventure, a journey through space, much like Merce Cunningham created in his abstract ballets. Dancers twitch, float and flutter to the music of their own daydreams. Set in an Art Deco train station, brilliantly designed by the choreographers, the music was created by Max Richter, among others.

The Statement, created by Crystal Pite, is ferocious and a must-see, a favorite with me last night. Why? Because it reminds us of another European master, Kurt Jooss, who created Green Table during the German uprising in 1932. Dancers Rena Narumi, Aram Hasler, Jon Bond and Roger Van der Pool move to spoken words and show us that if we listen or watch, we can figure out what to do. Or at least try. It’s worth the trip to Washington to see this dance, only here through Friday. As a bonus, the Cherry Blossoms are in full bloom.

Nederland Dans Theater played April 4-6, 2018, at The John F. Kennedy Center for the Performing Arts, 2700 F Street, NW in Washington, DC. For tickets for other shows, visit the box office or purchase them online.