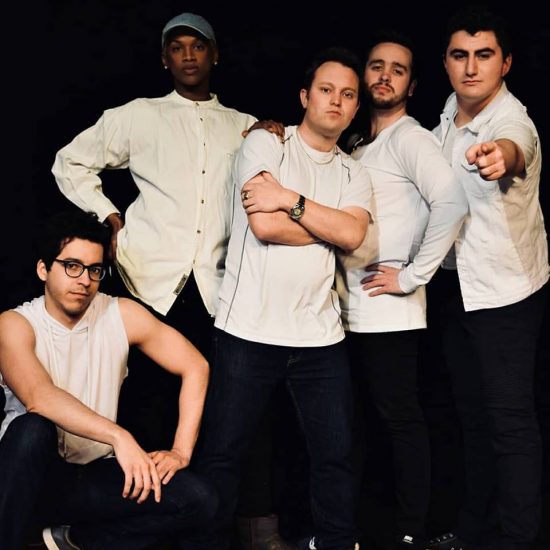 The cast of “Altar Boyz” by Rockville Musical Theatre. From left to right: Luis “Matty” Montes as Abraham, Michael Mattocks Jr. as Mark, Justin Douds as Matthew, Nick Cox as Juan, and Evan Neufeld as Luke.

It’s easy to assume what you’re going to find when you sit down to watch a show called “Altar Boyz,” but I urge you to put your expectations behind you as you go into this one. Rockville Musical Theatre’s “Altar Boyz” does more than just take easy digs at Christian bands; it is a hilarious mixture of golden pop vocals, classic boy-band choreography, tasteful parody, and a few brief moments of genuine heart.

The boys each have strong vocals and comedic instincts…

The show’s framework is this: it is the last concert of the Altar Boyz’s national “Raise the Praise” tour, and we, the audience, are in attendance. The Altar Boyz themselves are a Christian boy band that emulates the pop sentimentalities of the 1990s, though the tropes used still resonate today, in the time of One Direction. Their songs are pretty much exactly what you’d expect: a rock ballad called “Epiphany” about ‘coming out’ as Catholic, a pro-abstinence “love” song called “Something About You,” and “Church Rulez,” which needs to further explanation.

The band is fronted by charismatic leader Matthew, played spectacularly by Justin Douds. Not only does Douds have a clear, powerful voice, he also has the boy band mannerisms and movements down pat. His featured solo, the aforementioned “Something About You,” was stunning, and he stood out in group numbers like “The Calling.” Michael Mattocks Jr., as not-so-ambiguously gay Mark, was also a crowd-pleaser, hitting sky-high riffs with ease. The fictional boy band was rounded out by Nick Cox as Juan, the token Latino who is in search of his long-lost parents; Evan Neufeld as Luke, the dunce of the bunch, who has struggled with a history of ‘exhaustion’; and Luis “Matty” Montes as Abraham, the band’s inexplicably Jewish lyricist.

The boys each have strong vocals and comedic instincts, but their brightest moments are when they’re working in tandem. Their crisp harmonies are showcased in numbers like the opening “We Are the Altar Boyz,” and “I Believe,” a number that also puts the spotlight on Montes, and deservedly so. And though the show is primarily sung—we are pretending we’re at a pop concert, aren’t we?—the few scenes present are just as quick-paced and fun as the songs.

Choreography by Shari Seymour was superb. Though the execution could have been tighter in places, the choreography itself so perfectly emulates that classic 90s style, and in moments when it snapped into place, it added to both the humor and the heart. The masterfulness of RMT’s production of Altar Boyz comes from the fact that they know their source material, and at times, it’s almost easy to get lost in the fiction and believe we truly are attendees of the “Raise the Praise” tour.

Let me be clear, though: this is not the world’s most intelligent show. Sometimes, sitting through prolonged jokes where the punchline amounts to “a*s is another word for donkey” is a little less than ideal. But rest assured, the actors’ comedic prowess is such that even the more crass jokes had no trouble drawing a hearty guffaw from the audience.

One final thing worth noting is that “Altar Boyz” is neither a love letter to nor a condemnation of Christianity, so don’t enter the theatre assuming anything either way. But regardless of your religion, something about “Altar Boyz” just makes it lovable as hell—no pun intended.

Running Time: An hour and a half, with no intermission.