Theatre Review: ‘Around the World in 8 Plays’ at College of Southern Maryland 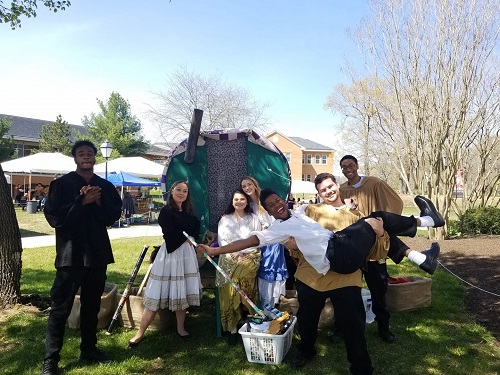 Performers in “Around the World in 8 Plays” at the College of Southern Maryland get ready to play! Photo courtesy of Paula Navarro.

Have you wondered what types of stories are told across the world? How people in different countries and from different cultures celebrate the wonder of storytelling? Well, here’s your answer. College of Southern Maryland’s “Around the World in 8 Plays,” featured on the lawn during their Annual Renaissance Festival this April, does just as the title describes; takes you around the world to explore stories from different countries and cultures.

….a performance you will want to see again and again!

The show begins informally, with some fancy footwork and fun music. As the cast settles in to tell their stories, you meet the somewhat ornery and very grumpy Head Storyteller (portrayed with great fun by Gershawn Mason). His pessimistic character is countered by his true love (portrayed effortlessly by Emma Ansell), who is dripping with fun sarcasm and wit. Together, they lead a band of players in telling the audience stories that capture not just your attention, but your imagination, and manage to knock your funny bone silly along the way! Yes, the humor in this production is impeccable, with laughs for all ages.

You will find yourself traveling across the globe from Czechoslovakia to Ireland, South Africa to India, and many more. If you pay attention, you will meet witches, goats, demos, magic bags of rice, mountain throwers, Prince Half Son, and witness heroic battles, chases, and epic fails. Be prepared for loud noises, singing, dancing, Boris, and the occasional flying horse on a stick. Oh, and if you happen to see the little old ladies who are embroidering a handkerchief, don’t hold your breath. They will certainly leave you in stitches!

It shocked me to learn that this production, originally scheduled to be performed in March, was canceled due to the windstorm we experienced here in Maryland. Unfortunately, as they began the process of rescheduling, they faced the loss of 9 cast members due to scheduling issues, recasting, lack of rehearsal time and space, and the uncertainty of the weather (did I mention this show happens outside?). I never would’ve guessed, based on the performance they provided, that they went through these hardships. The small cast of players, numbering 12 in strength, held their own as they jumped across countries, cultures, times, and Boris, with the help of their trusty gypsy wagon, props, and some incredible live sound effects.

Oh, the live sound effects were perfectly on point, and also performed by the cast. Just when I didn’t think the show could get any better, Boris (one of the players) went and caught an audience member to keep as a pet. Yep, that is just one example of the crazy entertainment that is this show. Director Michelle Ebert Freire certainly captured everything one could desire in a children’s show and took the script just as far as one could imagine. I must congratulate her for compiling this wonderful cast and putting on a great show, despite the whirlwind that threatened its possible performance. The costumes, created by Shemika Berry, were whimsical, versatile, and fondly resembled the costumes I used for dress up when I was a child. The props were perfect – I loved the 8 headed demon and the sock puppet whose eyebrows were bigger than its whole face! Yes, Cece Pinckney, Kelly Patton, and THE 1010 class certainly put together some great storytelling tools.

“Around the World in 8 Plays” is a performance you will want to see again and again! It’s just a good show full of good fun with great performers! I simply marveled at the diverse line of characters these 12 players managed to portray. One minute they were in Russia, completed with Russian accents and names, and the next they were in Ireland with sock puppets and ‘wee’ lads! I was particularly amazed at Nathaniel Daetwyler and Caleb Smith, who delivered undeniably incredible performances! While these two stood out particularly to me, truly each one of these performers provided an unforgettable show, and certainly revealed that we have much talent hidden in our community theatres! So if you have time, please come journey with this cast around the world as they give you an entertainment experience you will be talking about for days! You could even stop in to see the Renaissance Festival while you are there – so much fun! But if you see Boris, beware, or you might be the next newfound ‘pet’ of his!

Advisory: Good show for all ages, as long as you are willing to play along. There are moments of intense laughing, death-defying imagination, scary monsters, and some gouging of eyes (they are returned).

“Around the World in 8 Plays” was at College of Southern Maryland in La Plata, MD April 21st-22nd at 4 pm. For more show information about their children’s theatre, please see here.