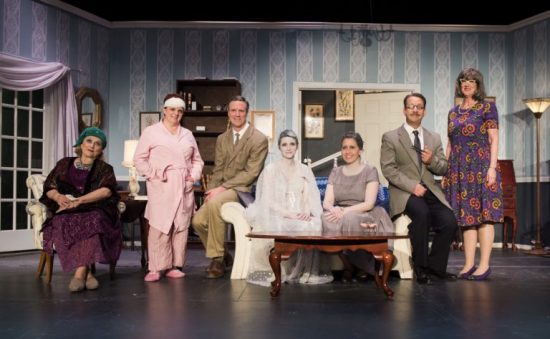 Noel Coward would, I think, be very pleased at the sprightly and waggish production of his play, “Blithe Spirit,” by the talented ensemble of the Vienna Theatre Company. Directed by Rosemary Hartman, the evening is a welcome respite from the “real world” and provides moments of laugh-out-loud effervescence.

“…the evening…provides moments of laugh-out-loud effervescence.”

Rather than place the play in the 1940s (it was written and first produced in 1941), it has been set in the post-war early 1950s; the fashions of crinoline petticoats, cinched waists, gloves and hats give immediate cultural and social cues as to time and place. The costume designer, Francoise Davis, deserves kudos for impeccably cut and sewn costumes for the women, and perfect suiting for the gentlemen. The detail is such that when a second ghost appears, the costume she died in is exactly the same, except it has been completely bleached of color. It’s a beautiful attention-to-detail moment.

The plot concerns a dinner party given by the Condomines; Charles is a novelist and wants to do some research on paranormal activities (for his next murder mystery). They invite Madame Arcati, who lives in the village and has had some renown as a medium to dinner and then to lead them in an attempt to communicate with somebody dead. The Bradmans were invited as they are the social equals of the Condomines and it would have been too awkward to invite the vicar and his wife. Edith, the housemaid, represents the servant class, and turns out to be the linchpin of the ensuing madness, albeit unwittingly.

Madame Arcati does conjure a spirit—Elvira, who died tragically young and has been on a waiting list to have an opportunity to come back and reclaim her husband. No one expects the Madame to really channel a spirit and she is surprised and absolutely delighted. Elvira has other plans and the rest of the play is indeed “an improbable farce,” as Noel Coward stated.

As Charles, McRae brings an understated Peter Pan quality to the role; as the plot gathers steam (or ectoplasm), you begin to see what’s behind the mask of the urbane, intellectual man of letters–he wants to have both wives, with no consequences, and no real thought to either of their feelings. He very gradually reveals the monster within.

Plank imbues the role of Elvira with a free-spirited girlishness that underscores her loneliness in her life beyond the veil. As she gracefully wafts about the stage in trailing white garments that match her ghostly-white face and neck (the make-up job is superb), her joy at being reunited with Charles and needling of his current, live wife is slowly subsumed by her desire to have Charles to herself. It’s a delicate balance and Plank walks that line confidently.

Poor Ruth. She is pragmatic, organized, not very imaginative, and wholly in love with her husband. Underneath that proper exterior, she needs reassurance of Charles’ love and fidelity, and he uses that to gaslight her by constantly asking her to think about how poor Elvira feels. Akbar gives a nuanced performance of a woman whose competition is not only dead and unseen (to everyone but Charles, and later, the maid), but whose husband is undermining her love carelessly and selfishly. Her growing desperation evokes pity, even as her struggle to hold onto her dignity and husband commands respect.

The evening is enjoyable and relaxing. The pacing is fast as a good farce requires, and the actors are perfectly emblematic of their time and social standing in a traditional British village.

“Blithe Spirit” performance dates are: 8pm: April 20, 21, 27, 28, May 4, 5; 2pm: April 29, May 6 at the Vienna Community Center. The show is presented by the Vienna Department of Parks and Recreation and the Vienna Theatre Company, and is produced by special arrangement with Samuel French, Inc. For more information, please click here.