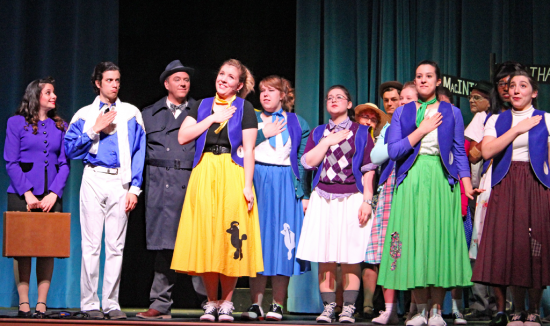 The late spring here in the Washington DC/Virginia vicinity has unearthed a fledgling theatre company bursting forth in its initial production. And just like the new buds of spring, this production was a little unsteady but grew strength and vitality as the night went on. Gateway Community Theatre is the new group on the scene, answering a need for community theatre in the Chantilly/South Riding region of Virginia. Their initial production is the classic rock and roll feel-good musical, “Bye Bye Birdie. “

And it is decidedly middle America fare. Even with a catchy score by Charles Strouse, with classic lyrics by Lee Adams and a book to match by Michael Stewart, “Birdie” seemed oh gosh square even when it first opened.

Gateway’s fine production of ‘Bye Bye Birdie’ not only inspires us to put on a happy face but also reminds us that we’ve got a lot of living to do!

The show, about crazed teenagers swooning over a rock and roll idol and the consequences of behaving badly, was a big hit on Broadway for several reasons. It serves up superb classic songs and has an uplifting message, and with its large cast comprised of children, teens and adults, offers a chance for a community to be fully engaged in the initial offering.

Aside from the sultry opening number that Ann-Margaret made memorable in the 1963 film, this is a sweet throwback show about simpler times in Sweet Apple, Ohio, and aside from Rose’s shenanigans with the Shriners (more on that later) is family fun, an anticipated goal of Gateway shows.

The big draw is heartthrob Conrad Birdie, but the show is really about a couple dealing with life and love. Sound familiar? It’s the fifties and songwriter and music agent Albert Peterson, warmly played by Joe Christian, is at a crossroads–juggling his up and down career, longtime secretary/girlfriend, and his hilariously overbearing mother. His secretary Rosie, sharply played by a smooth and ever patient Rachel Wilks, comes up with a scheme to finally marry Albert, get him out of show business, get a job teaching English, and yes, away from mama. Meanwhile, his client, rock and roller Conrad Birdie (Elvis then, Justin Bieber now) is off to the army and Albert plans for him to kiss a teenage fan goodbye while singing Albert’s final song on the Ed Sullivan Show. Mischief and mayhem ensue underscored by a score that has heartfelt melodies as well as rock and roll. Teenage growing pains, rock star crushes, and a few interesting turns of events await us.

Christian’s Albert is a lovable, put-upon mensch who shows nice upper tones in ‘Put On A Happy Face’ and ‘Rosie.’ Wilks, as Rosie, plays frustrated girlfriend to out on the town bad girl mixing it with backroom Shriners well. In a hilarious send-up, she frolics with each member under the table, symbolically wearing them out, all to a catchy backbeat and dance routine.

Mrs. Peterson (the hilariously put-upon Susan Kronenberg) makes a caricature come alive as the ever-present meddling mom. All the nagging, demanding, whining, kvetching and moaning are worth it. Conrad Birdie (Peter Moses) croons well and gyrates in decisive moves and innocent ingénue Kim is played by an engaging Darby Ogorek, who shows a vibrant energy and stage presence beyond her years. Her duet with Wilks in ‘How Lovely It Is To Be a Woman’ was a highlight.

The team Director John A. Newman and Producer Greg Ogorek have done a commendable job building a production team from the bottom up. And a shout out to all the remarkably well focused youngsters in the cast, who enthusiastically enjoyed their time onstage, even with a new venue and technical challenges.

“Bye Bye Birdie” is a regional theater favorite, and in every incarnation, there’s always something special about putting on a feel-good musical of yesteryear. Gateway’s fine production of “Bye Bye Birdie” not only inspires us to put on a happy face but also reminds us that we’ve got a lot of living to do!