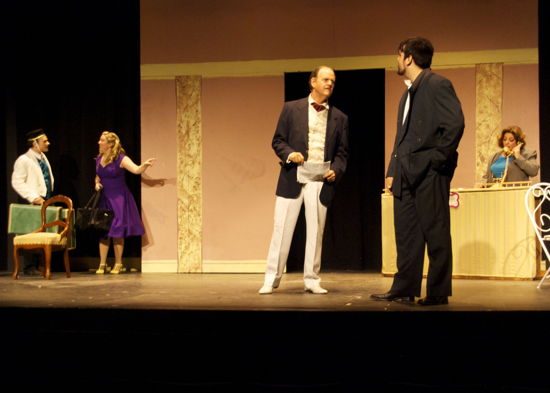 “Dirty Rotten Scoundrels” (directed by Rebecca Kotraba) at Prince George’s Little Theatre, really wants to be a funny show for all ages, and it manages to do that, however it suffers from a few hangups. These hangups are pretty technical in nature and have nothing to do with the talent on the stage. As it was opening night though, once they smooth out the process a bit I’m sure the production will run a bit more smoothly.

Aside from technical issues, the cast is quite good. The story itself is meant to make you laugh, and if the reactions I witnessed last night were any indication, I’d say these players are on track for a hit. The story centers on Lawrence & Freddy (played by Brian Binney & Shane Conrad, respectively) – two semi-well-meaning con men living the good life in Majorca. While Lawrence, is at the top of his game, perfecting his act for ages, Freddy is less than polished when it comes to the con game. As you can tell by his less than stylish attire – more Hawaiian shirts and less impeccably cut suits. (Costumes by Linda Swann) Lawrence takes Freddy under his wing, and a tournament of cons (of sorts) ensues; both attempting to out-con the other. Binney & Conrad play well off of each other. The audience needs to believe that these 2 men actually like each other, even if each is attempting to outwit the other. In this case, their camaraderie plays very believably. I completely buy Binney as the smooth and debonair con man. He plays the role with a twinkle in his eye that works perfectly.  Because Freddy is the exact opposite of Lawrence, Conrad plays the role with a little less twinkle and bit more sarcasm. His character is given the most humorous lines of the show, and he brilliantly manages to mine them for every laugh.

…I’m sure this talented group of actors will work out their small technical flaws and focus on the “great big stuff” that makes this production so much fun.

Another standout in the cast was Jim Adams, playing Andre Thiebault; the right-hand man to Lawrence and a police detective. At some point in the show, he meets his match in a woman who’s come looking for Lawrence. At that point, the character and the actor seemed to come alive. He is able to take simple comedy and mold it into something so much funnier. Adams’ nervousness at falling in love with this woman, plays through so well, that you can almost imagine this character in the real world on a first date with his new love, Muriel (Michelle Reed Kretkowski). These two actors have believable and very funny chemistry and work so well as a couple, that I wish that the show included more about their little love story.

While for the most part, the show revolves around these scoundrels, the women in the cast are also quite talented and give these scoundrels a run for their money. Rowena Winkler, playing Jolene; the woman that both Lawrence & Freddy are longing for gives a believable performance of a country bumpkin who’s just happened into a whole lot of money – which is basically gold for these two con men. The ensemble of men and women that play characters ranging from a cowgirl from Oklahoma to a Royal Navy man on leave, prove themselves as valuable members of this ensemble switching back and forth between characters (and so many costumes) flawlessly.

Although there were some technical issues, Lawrence and Freddy perfected their own double-act, I’m sure this talented group of actors will work out their small technical flaws and focus on the “great big stuff” that makes this production so much fun.

Running Time: Approximately 2 hours and 4 minutes with one intermission.