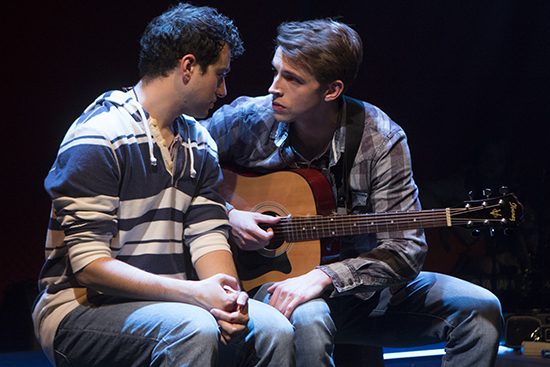 “I wanna love somebody, I hear you need somebody to love,” sings Matthew Sweet on the titular track of his 1991 album, Girlfriend.  The track is also the title of the musical “Girlfriend,” making its DC premiere at Signature Theatre, and that initial lyric epitomizes the feeling of tentative romance that pervades this charming, feel-great production.

Set in Nebraska in 1993, the show opens on Will (Jimmy Mavrikes), a graduating senior who has just finished his last day of high-school. Throwing his book bag in the trash can, he joyfully declares it to be a “new year!” – meaning the dawn of a new era in his life. Part of his excitement also comes from the sudden interest of Mike (Lukas James Miller), a fellow classmate, who has asked him to the movies. “I thought I was the only one like me in Nebraska,” exclaims Will, suggesting his hope that the hangout might be closer to a date. The show follows the blossoming of their friendship, and romance, as the two bond over a shared love of music and mix-tapes.

As basically a two-man show, Mavrikes and Miller deliver stellar performances and have a warm and easy chemistry. Mavrikes is sweet and sincere as Will, dropping some of the funniest lines of the production: “I’ve been waiting my whole life for a boy to ask me to run errands,” he swoons before heading to Safeway with Mike. Miller plays Mike as endearingly earnest, a jock but not a jock-type, who is caught between his father’s academic demands and his own passion for making music.

The two nicely telegraph the evolution of Will and Mike’s relationship, both in their physical and vocal performances. In their first scenes talking on the phone (cordless, of course) they perfectly capture teenage-boy angst posture, with hunched shoulders and hands shoved in pockets. As friendship intensifies into something more, their awkwardness gives way to guitar riffs, dancing, and jumping on chairs, as well as some great duets. Both strong vocalists, their numbers range from the high-energy “Looking at the Sun” to the softer and more sentimental “We’re the Same.”

Todd Almond’s book paces the show well, with consistently humorous touches that break the tension, sexual or otherwise. With no other characters, the two seem to have created their own world, with the outside world only implied by Ryan Hickey’s nicely understated sound design. Those interruptions can be unpleasant reminders of the adult world, as when a slur is hurled at the pair by an unseen passerby, but for the most part, the couple enjoys a summer-break utopia.

The shallow space of the stage makes the action seem even more immediate and intense, which director Matthew Gardiner works to great effect. Some of the most enjoyable early scenes are of Will and Mike’s ‘not-dates’ at the drive-in movie theatre, which sees them staring straight ahead making awkward conversation. The intimate staging makes their discomfort that much more painfully funny.

The music itself is the third character of the show, taking physical form in the four-person, all-female band installed in a sound booth behind the main stage (Britt Bonney on keyboard, Beth Cannon on guitar, Nicole Saphos on bass and Erika Johson at the drums). The innovative staging, far from being distracting, instead works to make the tunes more immediate and accessible. It can feel like you’re at a musical, a one-act play and a concert at different parts of the show, aided by Colin K. Bills expressive lighting.

With music direction by Britt Bonney, the show uses 10 songs from Matthew Sweet’s album, which has a ’90s indie-pop vibe that nicely harmonizes with the characters’ angsty confusion. Costuming (Frank Labovitz) and set design (Misha Kachman) work well together to conjure the era with plenty of flannel and a stack of VHS tapes in the corner. Smells like teen spirit, indeed.

Will and Mike experience some experience some heartbreak, and sing some angsty ballads along the way, but inevitably find their happy ending. Overall, “Girlfriend” is a sweet, nostalgic good time.

“Girlfriend” runs through June 10 at Signature Theatre. For tickets or more information, call 703/820-9771 or click here.