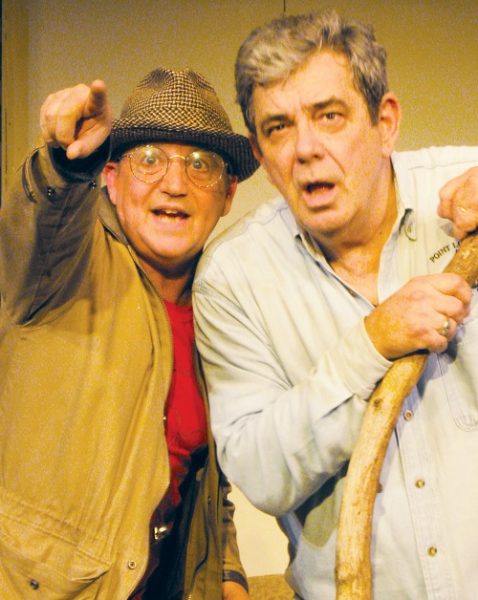 Many of us are familiar with the story of Job in the Bible. We even liken ourselves to Job whenever our lives take a turn for the worst. Clearly, we aren’t the only ones who find some comfort or solace in the story of Job. Neil Simon, the famed playwright of “The Odd Couple,” found the story of Job to be the perfect base for a play, and “God’s Favorite” was born. Newtowne Players is staging this Neil Simon play, directed by Rick Thompson, almost the entire month of April.

In good Neil Simon fashion, the story of Job took the play form of a comedy complete with drinking, cursing, and an overall ‘modern’ feel to the play. Job becomes Joe Benjamin, a wealthy owner of a cardboard box manufacturing company in the 1950’s, father to three very spoiled children, and devout follower of God. In the Bible story, Satan asks God if he can test Job’s faith and see if Job will turn from God. God grants Satan permission to do anything except kill Job.

Neil Simon added to this familiar story a few additional characters to really make this well known story a bit more surprising. Truth be told, “God’s Favorite” tells the story of Job in a way not explored before.

Be forewarned, this is not the traditional story of Job. Yes, it hits all of the main points, and adds comedy to some of the trials Job endures, but this is not just a Bible story brought to life. If you are a Christian looking for a clean Christian comedy, this show may not be best suited for you. Listening to the lines and watching the show, some of Simon’s characters became distracting. The timing of comedic and poignant lines overlapped, often canceling each other out. Also, the ending was abrupt and left me wanting more. However, I will say that the character of Joe really does hold true to the Job found in the Bible, and the story does hold a few very thought-provoking moments.

Beyond these challenges, I enjoyed the addition of the prodigal son in the play. I truly believed the line that Joe said “the son that does not believe is the father’s greatest anguish.” For me, Robert Rausch really brought Joe Benjamin to life. I was empathetic as he watched his son stray from God and endured the other trials Satan heaped upon him. While I’m not fond of Simon’s choices in the other characters, I think that he wrote some very wonderful lines for the character of Joe. Perhaps my favorite was an exchange between Joe and Lipton. (Joe) “Sometimes you get so involved with your own problems that you forget about others.” (Lipton) “Yeah, people don’t care about people anymore. You’re finding out that.” The poignancy and truth, when heard, was impeccable.

Out of the other cast members, I really enjoyed the performances given by Robin Finnacom (Rose Benjamin), Lewis Beckley (Ben Benjamin), and Larry Silvestro (Morris). These three stepped up and portrayed more than just the one dimensional characters given to them (a characteristic of Simon’s plays, per my experience). Rose is the stereotypical rich, snarky, demanding wife, and Finnacom embodied her perfectly! Her comedic timing was great! Ben Benjamin is the perfect son. Lewis Beckley played him perfectly, and I will be laughing at his phone conversations for days to come. Morris is a household servant and reminds me of a good watchdog: devoted and hardworking. Silvestro really drove that home, and added a great bit of humor to the scenes he was in.

The set was minimal, but well designed and put together by Dave Kyser and Linda Sanborn. The stately house was simple, yet elegant, and the set dressings were well balanced. I simply marvel at Newtowne’s rotating stage, an engineering masterpiece, and they used it well to show the major trials Joe experiences. I must praise the choice to have a single spotlight on the Bible that appeared throughout the show. From the beginning to the end, an oversized Bible was set on stage left with a light shining on it. This really grounded the show and brought me back to the play’s origins. The costumes, designed by Millie Coryer-Dhu, were well chosen. I did find it a bit odd, however, that in one scene Joe Benjamin had on suspenders and a belt at the same time.  With regard to the direction, I didn’t agree with some choices. Some of the character’s movements seemed static, or they moved in unnatural patterns. I also didn’t see the need for the second intermission. The last two acts of the show were short enough to be combined.

“God’s Favorite” includes many poignant moments, thought-provoking lines, and comedic exchanges in this show, not to mention the dedicated thespians who are bringing it to life. Even in the midst of this script’s weaknesses, I promise you that you will laugh! You might even learn something too. After all, Job’s story is about faithfulness, even in hardship or death, and that is a lesson we could all do with a refresher in.

Advisory: Occasional adult language and taking the Lord’s name in vain, drinking, and some sexual references.

“God’s Favorite” will be playing at Newtowne Players in Lexington Park, MD from April 6-22, 2018. For more information, or to purchase tickets, please see here.