Theatre Review: ‘Harvey’ at The Little Theatre of Alexandria 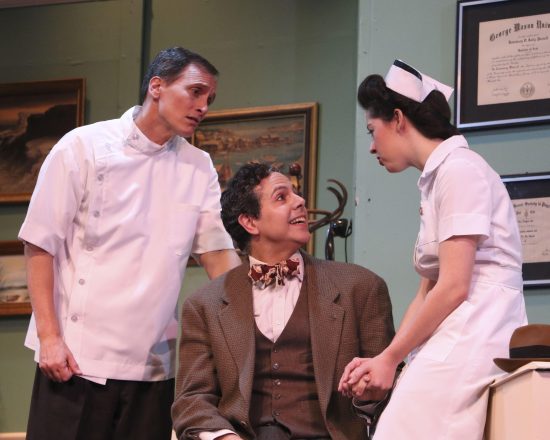 “My mother used to say, you can be oh so smart or oh so pleasant. For years I was smart. I recommend pleasant.”

The year is 1944 and Veta Louise Simmons (Rachael Hubbard) is holding a luncheon to introduce her daughter, Myrtle May (Catherine Gilbert), to the important ladies in town and, perhaps, snag her a husband. But there’s just one problem: Veta’s brother, Elwood P. Dowd (Andy Izquierdo), is in attendance and insists on introducing the guests to his dearest (if imaginary) friend, a giant white rabbit named Harvey. A Pulitzer Prize-winning drama by Mary Chase, “Harvey” explores our conception of logic and reason and the inherent value we give them, often at the expense of other parts of our humanity.

…the cast was excellent. Together they told a seamless story, their transatlantic accents and consistent energy carrying the audience along for the ride.

From the minute I entered the theatre, the set caught my eye. The scene opens in the library of the family mansion. The velvet furniture, old books, and tchotchkes covering every surface speak of a yearning for class that is restrained by stuffiness and a feeling of being past one’s prime. Joceyln Steiner’s set dressing was detailed-oriented down to the last lace doily and easily communicated more about the family than their opening lines. The set design by Matt Liptak was equally important to developing the plot. Liptak’s creatively angled entrances and exits, as well as his use of stairs, quite literally set the stage for the actors’ comedic timing, and when the set was rotated to reveal a perfectly convincing doctor’s office, the audience was audibly impressed.

Supported by an intricate set and wonderful period costumes designed by Jean Schlichting, Kit Sibley, and Michelle Harris, the cast was excellent. Together they told a seamless story, their transatlantic accents and consistent energy carrying the audience along for the ride. Each actor took care to be visibly invested in the plot, maintaining exaggerated facial expressions and even garnering laughs without saying a word. Gilbert was particularly adept at this. Furthermore, a testament to the director’s (Frank Pasqualino) and assistant director’s (Hollyann Bucci) eye, everyone in the cast had perfectly timed and particularly comedic entrances and exits. The cast brought the show to life so well that a particular moment of suspense was met by the audience’s sharp intake of breath and a sustained, uneasy silence.

Yet despite such a cohesive and talented cast, Hubbard and Izquierdo were standouts. Hubbard’s Veta Louise was full of emotion and often stole the show. She has the rare talent of acting shrill and hysterical while maintaining perfectly clear diction, and she was able to change the physicality of her character to fit the situation. Izquierdo’s Dowd was equally impressive, if on the opposite end of the spectrum. The unflappable demeanor and innocence Izquierdo gave Dowd were so convincing that other cast members sometimes struggled to act angry or frazzled in the face of his calmness.

Join Dowd, Harvey, and the whole cast in discovering the truth and, more importantly, whether that truth really matters in the end. As Dowd puts it, “I wrestled with reality for 40 years, and I am happy to say I finally won out over it.” May we all be so lucky.