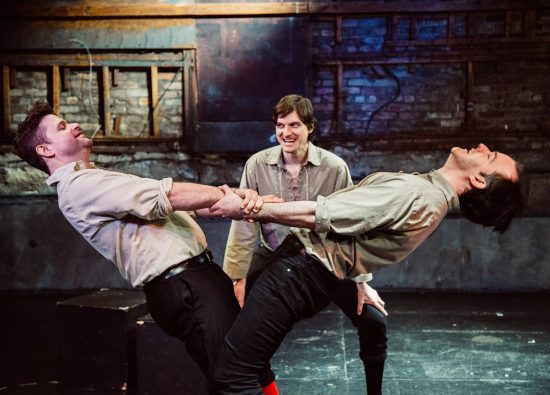 “Lord, what fools these mortals be.” Five men on a blank stage make up a new Shakespearean comedic masterpiece before your very eyes, as the impressive and lightning fast skills of the Improvised Shakespeare Company (ISC) take the Kennedy Center’s Family Stage this week.

Originating in Chicago, a city world-renowned for top-tier improv comedy, the Improvised Shakespeare Company was founded back in 2005. In the years since, they have been named Chicago’s best improv group by both the Chicago Reader and the Chicago Examiner and have received prestigious awards and acclaim in LA, New York and other cities as they have traveled across America.

Each performer had an extensive knowledge and mastery of Shakespearean language and literary tropes, lightning fast and razor sharp improv skills, and impeccable comedic timing.

Like many other improv troops, this group’s performances center on an audience suggestion; however, with ISC they create an entire show based on the suggestion of a title. As anyone who has seen either a Shakespeare production or improv show before would know, these parameters make it incredibly difficult to produce something that is both an effective homage to the Bard of Avon and a laugh riot. But this is exactly what the ISO was able to accomplish.

This is usually the place in my reviews where I discuss the show that I saw, but this performance is a bit of an anomaly. As I described above, the premise of these shows is that they create an original Shakespearean play at each performance, so describing the actual show that I witnessed is a bit moot. However, this is a real shame, since “The Midwife’s Dilemma,” was uproariously funny, original, and a Shakespearean riff that the Bard himself would have been proud of.

At the beginning of the show, the 5 performers took the stage: Joey Bland, Ross Bryant, Brendan Dowling, Steve Waltien, and IOS creator and director Blaine Swen. To be ready for any suggestion thrown at them, they were all dressed in basic Elizabethan style laced neck shirts, black pants, black or white hose, and black shoes. Once they received and accepted “The Midwife’s Dilemma” as that performance’s title, they huddled for what seemed like moments before jumping right in. Bland kicked off the show with an incredibly detailed, relevant, and comedic prologue. Not only was Bland able to integrate imaginative and comedic birth-related wordplay into the prologue, he did it in iambic pentameter!

After that incredibly auspicious start, the troop went to work on the story. Each performer played multiple roles, sometimes crossing gender lines. Several well-worn Shakespearean tropes were present; mistaken identities, fraught love affairs, zany schemes, and banishment to the woods and foreign lands. Some particular highlights were Bryant as a petulant French servant named Henri, whose name no one could remember, Waltien and Swen as a murderous married couple, Dowling as both substitutes in a Duke/Duchess couple, and the entire ensemble as a group of “Banished Men,” who entertained the audience with a jolly tune.

At every turn, this reviewer was impressed by both the speed and depth of quality of the performance the Improvised Shakespeare Company provided. I saw the 7 pm show and was so entertained that I wanted to go straight to the box office and buy tickets to their show at 9:30. Each performer had an extensive knowledge and mastery of Shakespearean language and literary tropes, lightning fast and razor sharp improv skills, and impeccable comedic timing. So, thou should not protest too much and get thy self to the funnery of an Improvised Shakespeare show.

Advisory: Shows can include adult language and situations and are recommended for audiences 16 and older.