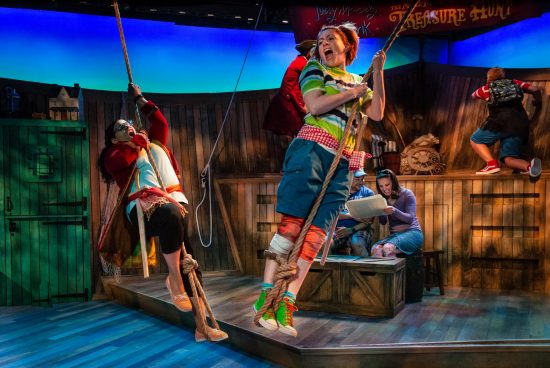 McDonald’s two dozen novels about elementary schooler Judy and her younger brother Stink explore many aspects of their life in Virginia, but for this theatrical world premiere — commissioned in an unprecedented partnership of seven U.S. children’s theatres — playwright Allison Gregory has wisely focused on one of the simpler, more action-packed volumes.

As summer ends and third grade begins, Judy is bummed that she did not get to travel anywhere over the break, angry that she won’t have a “T-shirt with words” showing off where she’d been. Her sympathetic parents decide on a weekend excursion to Ocracoke Island (“Artichoke” in Stink’s reckoning, “Okeydoke” in Judy’s), where the two kids get involved in a tourist treasure hunt, competing against an equally bright brother-and-sister pair.

…a fast-paced hour filled with puzzles and gags…

Director Mitchell Hébert delivers a fast-paced hour filled with puzzles and gags, with a firm foundation in Gregory’s funny script and strengthened by the cast. Kelsey Painter, who has performed with several local children’s theatres, and Philip Da Costa, an Adventure Theatre regular, both bring just the right touch to the main characters, portraying Judy and Stink realistically and humorously. Both actors capture the excitement of childhood without reducing their characters to goofy archetypes.

Washington-area theatrical mainstay Frank Britton makes his Adventure Theatre debut as the Moodys’ dad, alongside Karen Vincent as Mom. In these roles, they exist mainly for comic effect, but as with the others in the ensemble, they keep their characters above the level of sitcom silliness. Each also plays several other characters that Judy and Stink meet while on their quest; Vincent is especially funny as a harried proprietor who is accosted by our adventurers when she just wants to go home.

Heather Gibson and Philip Kershaw are charming as the Moodys’ rivals in the treasure hunt. Their characters shadow and mirror the protagonists — we don’t even find out their names until the last scene — and they do a fine job of portraying both the villains Judy imagines them to be, and the clever kids that they actually are.

The action plays out on a bow of a pirate ship, designed by Paige Hathaway to make for easy changes of scene and for the frequent shifts between the real world and Judy’s active imagination. Movement Director Kathy Gordon works in some boisterous dance interludes primarily featuring Gibson, Kershaw, and Painter.

My sons, now teenagers, were just the right age for McDonald’s books when they were coming out, so I knew Judy and Stink well. It was clear, however, that a fair number of audience members — young and old — were unfamiliar with the series. This did not seem to affect their enjoyment, nor were the grownups in the crowd afraid to laugh at this genuinely funny show.