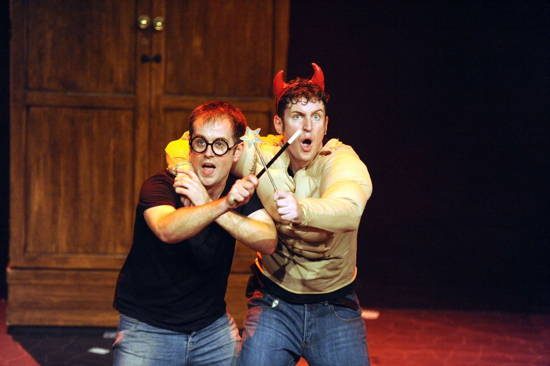 “Potted Potter”, the good-natured send-up of J.K. Rowling’s seven Harry Potter novels, is back at the Shakespeare Theatre Company for another brief run of dumb fun.

Daniel Clarkson and Jefferson Turner created the earliest version of the show more than a dozen years ago to entertain queued-up muggles waiting for the release of the sixth book. It went on to be a hit at the Edinburgh Fringe and in London before making its way to America. It’s now an upbeat, giddy hour-and-change show suitable for all ages, free of cursing, if not curses.

…’Potted Potter’ is worth the trip…

Clarkson and Turner are gifted physical comedians and improvisers, and the show’s best moments came in their interactions with the audience and in their ad-libs. It’s a frenetic show — Sidney Harman probably never imagined the audience in the venue that bears his name batting around a beach ball — and some of the best moments came in the performers’ honest reactions to unexpected mishaps.

“Potted Potter” is full of silly wordplay and enough corn for a Great Hall holiday feast. What it is not, however, is a particularly good parody of the source material. The creators promise to get through all seven books — some 4,200 pages — in 70 minutes, so severe streamlining is to be expected. But while we get a lot of Harry and Voldemort, and a bit of Ron and Dumbledore, Hermione and other major characters barely appear. Some of the characterizations, like that of Severus Snape, have little in common with their originals.

The segments on each book follow a pattern: a brief plot summary, some confusion between the two actors, and some goofy nonsense. It’s highly enjoyable, but it’s not really a “Potter” parody. It is hard, then, to define what exactly “Potted Potter” is. While the details of the books are left unexplored, there are enough jokes about the books that an uninitiate would be perplexed. But the comedy is broad enough that everyone in the house was laughing loudly.

While it defies easy classification, “Potted Potter” is worth the trip for Hogwarts wannabes, particularly those with children. The show is just the right length for young theatre newcomers, and for the youngest, there are gentle jokes at their level about characters they love. For older fans, there is the joy of watching two very talented performers operating at top speed.

Running Time: One hour and 10 minutes with no intermission.