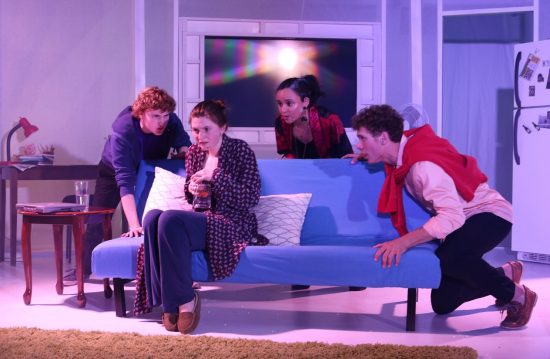 Nick Blaemire’s highly original 2015 musical “Soon” is currently in production at the Highwood Theatre — or, rather, in two separate productions. Highwood is itself highly original, in that it is both a professional theatre and a teaching company for young performers, and director Cate Caplin has set two quartets of actors to work on Blaemire’s show, one made up of adult performers, and one consisting of high school seniors.

…“Soon” offers a chance to see four rising talents in a clever show by another theatrical voice on the rise.

“Soon” centers around Charlie, an aspiring baker who lives in Greenwich Village and who has lately let her despair at the state of the world push her into agoraphobia. As the play begins, she is staring at CNN as Wolf Blitzer announces that catastrophic climate change will doom the planet much sooner than even the most pessimistic scientists had thought — roughly one year hence.

Charlie then navigates a year in which demise is looming but where day-to-day life still goes on — her first song is a fluffy ode to peanut butter that youth cast member Madison Middleton delivers in a style evocative of Anna Kendrick in “The Last Five Years”. Even though the world is ending, there are pastries to invent and a new boyfriend to get to know. (Middleton, incidentally, wrote “The Dog Must Die”, a drama about environmental apocalypse, that ran earlier in the Highwood season.)

Charlie also must deal with her mother Adrienne, played robustly and with verve by Isabella Benning. She gets the show’s best song in “Bohemia Paradiso”, one of “Soon”’s several nods to “Rent”. Adrienne starts off as a brassy comic character of the type Elaine Stritch might have once played, before her own frailties are later revealed. (Comic relief duties are instead handed off to Henry Wiebe as Steven, Charlie’s roommate and closest friend. He gets the show’s best quips, and serves up great comic timing.)

There is more to Charlie’s story than it seems at first, and “Soon”’s major twist is a genuine surprise. While the actors handle the shifting emotional complexity well, Blaemire’s music and lyrics are stronger than his book, and a few scenes get overwrought and bogged down. “Soon” is primarily a tight and smart show, but Blaemire could perhaps use a collaborator for future efforts.

Highwood’s technical crew is made up of students ranging from fifth grade to high school, and they have done an admirably professional job in the company’s small black box. Charlie’s apartment has basic white walls, and that lack of color and the scant furnishings let the lighting by Jonah Witte and Eliana Beals-Simon change the color of the scene to reflect the protagonist’s changing emotional state.

One downside of the Highwood space is that it is not acoustically blessed, so the actors sometimes must fight the instruments to be heard clearly. All four manage to do this effectively, though occasionally at the cost of nuance. Even so, “Soon” offers a chance to see four rising talents in a clever show by another theatrical voice on the rise.

[Full disclosure: I have worked with the Highwood Theatre as a performer, but not with this particular director or artistic team. My son has also worked with the student company.]