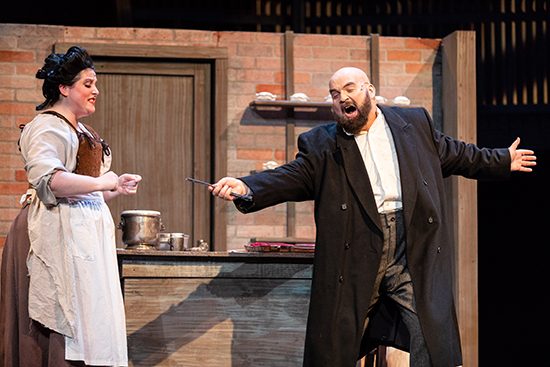 “He never forgets and he never forgives.” This recurring lyric sums up the dark heart of “Sweeney Todd: The Demon Barber of Fleet Street,” a comically macabre masterpiece impressively staged by the Arlington Players. The line refers to the title character and his all-consuming (and I do mean consuming) mission of vengeance.

Featuring music and lyrics by Stephen Sondheim, and book by Hugh Wheeler, the “musical thriller” opens in a dark and dirty Victorian London. Sweeney Todd disembarks from the ship that has returned him to England, after being transported years earlier to Australia for crimes he didn’t commit. He says goodbye to Anthony, a fellow passenger and sailor on the ship, who is also a friend. They part, but their paths will cross again as Todd visits the places of his former life, where he was a barber and family man on Fleet Street. His former neighbor, Mrs. Lovett, remembers him and reveals what happened to Todd’s wife, Lucy, and child, Johanna, who have succumbed to the tyrannical power of Judge Turpin. As Todd plots vengeance for the Judge, he and Lovett hatch a gruesome plan: some of the customers to Todd’s re-opened barber shop will become the filling for the meat pies Mrs. Lovett sells.

… a comically macabre masterpiece impressively staged by the Arlington Players.

Dark though the premise is, the show is a buffet of musical theatre. There’s fantastic ensemble singing (“God, That’s Good”), and comic songs with delightful wordplay (“Little Priest”). Anthony (Brendan Hickey) and Johanna (AnnaBelle Lowe) bring a necessary warmth with their romantic ballads (“Kiss Me”). Sondheim’s conversational music is supported well by the live orchestra, which navigates the dissonant and dramatic score.

Bob McGrath as Sweeney Todd gives a restrained performance full of coiled energy: you can sense he’s always plotting. He pairs perfectly with Mrs. Lovett, as embodied by Erin Branigan, a magnetic performer who imbues the character with a blithe, cheerful amorality. She finds murder regrettable, unless it’s good for business. Their chemistry garnered the most laughs from the audience, especially in the hilarious sendup of their pseudo-domesticity, showcased in the song “By The Sea.” Mrs. Lovett’s enthusiastic fantasy about living together by the seaside with her partner in crime is juxtaposed with the harsh reality of Todd’s dead-eyed, vaguely answering “husband.”

The cast is supported by an excellent design team. Audrey Bodek’s set evokes the shabby poverty of Fleet Street, and Todd’s barber shop turned murder machine, is impressively realized. Joan Lawrence’s costumes underline strict Victorian class distinctions, with soiled grays for those below, and canes and waistcoats for those in power. E-hui Woo’s dramatic lighting and Drew Moberley’s sound design work well together: brilliant reds and metallic shrieks are deployed when murderous thoughts, or deeds, are happening.

Director Clare Shaffer keeps the energy up throughout the longer first Act and into the second. The use of the ensemble is impressive: they wander through scenes, embodying Todd’s own restlessness; act as a Greek chorus, narrating the action; and become witnesses to the tragedies that occur as the second Act becomes bleaker and bloodier.

As the director says in her show notes, the musical is a revenge tale, as well as a critique of the industrial consumption and gross class inequality that allowed for the injustices Todd experienced. Instead of only the poor being consumed, through labor or war, the upper class are served as well, quite literally: as Todd and Lovett joke when hatching their cannibalistic scheme, finally “those above will serve those down below.” While Todd’s nightmarish attempt to turn the tables only leads to his own downfall, the show is ultimately sympathetic to his hunger for justice.

Running Time: About 3 hours with a 15-minute intermission.

“Sweeney Todd” is playing through April 28th at the Thomas Jefferson Theatre in Arlington, Virginia. For tickets or more information, call 703-549-1063 or click here.