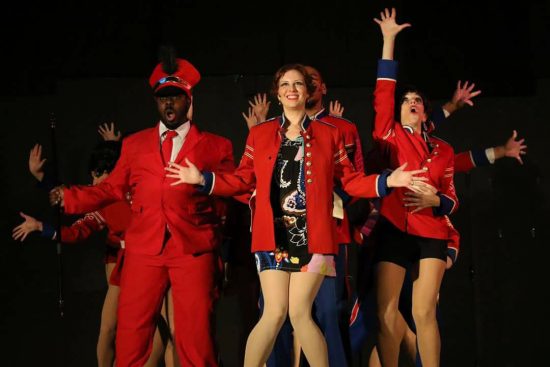 It’s no surprise that with a name like Charity Hope Valentine, this New York City dance hall hostess is a hopeless romantic, waiting for her turn to experience true love.  Charity’s optimistic, yet sometimes heartbreaking story, is told through the musical “Sweet Charity,” now playing through April 29th at The Heritage Players in Catonsville, Maryland.

This is no doubt a sweet and sultry confection of a musical, featuring a humorous book by Neil Simon and memorable songs by Cy Coleman (music) and Dorothy Fields (lyrics),  such as “Big Spender,” “If My Friends Could See Me Now,” “Rhythm of Life,” and “I’m a Brass Band.”

…a sweet and sultry confection of a musical…

Katherine Sheldon aptly takes on the role of Charity, a taxi dancer in mid-1960s New York City, where she and her fellow dancers are paid to dance and schmooze with the male customers at the Fandango Ballroom. Despite the clutches of Herman, the cuban cigar smoking boss (Played by an authoritative Jim Gerhardt), Charity and her friends Nickie and Helene (a hilariously feisty Megan Mostow and super singer, comedian extraordinaire Ashley Gerhardt) believe “There’s Gotta Be Something Better Than This.”

During the course of Charity’s journey, a chance encounter with Vittorio Vidal (a charismatically charming and suave Daniel Douek), a famous Italian movie star, brings her to his apartment for an unforgettable night in a closet (“If My Friends Could See Me Now”). But what if Vittorio’s jealous wife Ursula (a glamorous and hot headed Bailey Wolf) finds out?

From spending a night in a closet to spending the night in a malfunctioning elevator, Charity meets Oscar (an appropriately geeky and shy Adam Abruzzo), an educated, romantically repressed worker at an actuary.  The elevator scene is one of the funniest in the show as we watch Oscar freak out as he is stuck in a small space with seemingly little air to breathe.

The amount of dancing in this show must be the equivalent of 2 work-outs at the gym for the tireless ensemble of performers that is surely eating a bowl of Wheaties before each show.  As director and choreographer, Timoth David Copney fires up the sultriness of “Big Spender,” giving each member of the ensemble highly stylized sensual movements.  Later, wearing snazzy band uniforms, the ensemble led by Anwar Thomas as the Band Leader joyfully marches to “I’m a Brass Band,” where Charity proclaims “My heart is beating so fast. All kinds of music is pouring out of me, somebody loves me at last!”  My favorite dance piece in the entire show is “Rich Man’s Frug,” effortlessly embodying 1960’s dance in style and mood.

Speaking of bands, the live 15-piece orchestra, led by conductor Patty DeLisle, brings out the best in Cy Coleman’s score, featuring jazzy saxophones, smooth trombones, and exuberant trumpets. It should be noted that Charles Hirsch and his sound design provided a good sound level between the vocals and orchestra, even though the band is located audience right.

The functional set includes an elevator, closet, and Ferris wheel car.  Though simple sets can be suitable, it would have been nice to have just a little bit more pizzazz to fill in the primarily black colors of the nearly bare stage.

Overall, “Sweet Charity” is a sweet and sultry confection of a musical.  You will walk out singing the songs and remembering the wonderfully staged musical numbers, as well as the tireless work of the cast and ensemble.

“Sweet Charity” plays through April 29, 2018 at The Heritage Players in the Rice Auditorium of the Spring Grove Hospital Campus— 55 Wade Avenue in Catonsville, MD. Tickets can be purchased at the door or in advance online.