Theatre Review: ‘The Impostures of Scapin’ at College of Southern Maryland 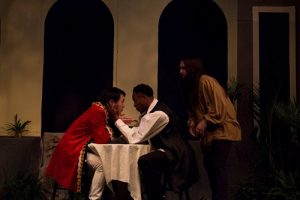 Octave reveals his woes to Scapin as Silvestre looks on in “The Impostures of Scapin.” Photo courtesy of Paula Navarro.

If you are coming to the theatre in hopes of experiencing entertainment that will allow you to forget your woes and laugh, this is the perfect show for you! “The Impostures of Scapin,” composed delightfully by Moliere and being performed at College of Southern Maryland during their Renaissance Festival, will leave you gasping for air.

When I ventured into the theatre at College of Southern Maryland to see this show, I did not know what to expect. I was ushered into the seating area on the stage by two lovely ushers and was greeted by the sound of running water. The set, though simple in its design of silhouetted buildings and various garden plants, featured a working fountain!!!! If you have never designed or built a set for a theatrical production, you do not know how difficult it can be to have running water on stage intentionally. This amazed me! Congratulations to set designer Erik Braun for accomplishing this magnificent feat!

As the show came to its start, the actors came to the stage swiftly in a state of pure confusion. I was nearly lost in the dialogue as Octave lamented about who knows what while Silvestre tried to keep himself awake and pretend to care. Enter Scapin, who clearly is the man everyone goes to when something difficult must be accomplished. As he deciphered the complicated recitation given by Octave, we are alerted to his current plight in the area of love. He is married and about to be married. Don’t worry, that’s not the end of the mess that Scapin must unravel!

The story continues with mayhem, modern humor, delightful parodies, swordfights, audience participation, and loads of unforeseen twists and turns. I won’t give away the ending, but Scapin is not who everyone thinks he is or is it the other way around? Amidst the fun, there is a curious tale portrayed whose ending is as mysterious as the show’s namesake. Perhaps you will see it coming, but I was certainly surprised!

Among the talented actors and actresses that graced us with their performances, Debion Tate (Octave), Alex Richardson (Argante), Katie Fischer (Barb Wench), and JR Cooke (Silvestre) stood out a bit more than the rest. These four delivered delightful performances with ease, to the point where I forgot they were just actors saying lines and began to fully believe they were indeed their respective characters. Each of the actors/actresses kept me on my toes with their witty and creative characters, capturing the chaos and humor of life and its many troubles. Perhaps Scapin said it best: “without the bumps, you aren’t living.”

The costumes for this show were great fun. The ladies featured lovely gowns of the Renaissance style, except they wore crinolines that leaned more towards the Southern Belle look. I simply marveled at some of the intricacies of the gowns; Shemika Berry certainly had her hands full creating those! The men sported Renaissance period shirts, but also managed to be wearing the modern day tennis shoes we tend to sport. I couldn’t determine the time period this show took place from the clothing or the play’s language, for it was Renaissance-like, but modern as well. I feel that Miss Berry did a lovely job of combining both in her clothing, as did Erik Braun in his set.

I will warn you, if you come to this show, be prepared to be in the show. Audience participation is not only recommended but required. You may find yourself a wall, a map, a cover-up, or even adding your two cents into the show. The transfer will be seamless, so keep your eyes peeled! Congratulations to Keith Hight for directing this marvelous comedy! “The Impostures of Scapin” is wonderfully hilarious, and audiences young and old will love it. It proved a great addition to the Renaissance Festival featured this weekend, and will have me giggling for a good while still.

“The Impostures of Scapin” played at the College of Southern Maryland in La Plata, MD April 20th-22nd during their Renaissance Festival. For more information and tickets, please see here.