Theatre Review: ‘The Pavilion’ at The Hub Theatre 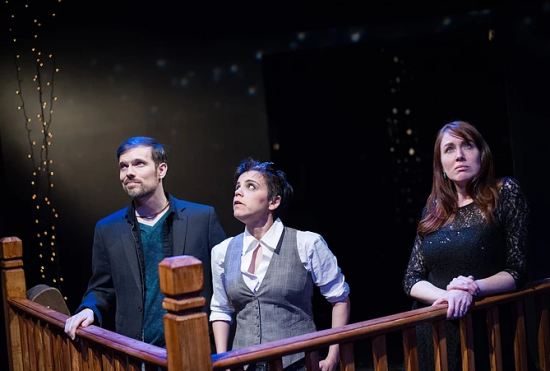 “The Pavilion” at Hub Theatre is a lyrical meditation on choices, consequences, forgiveness and acceptance. It is very effectively staged at The Hub Theatre—it is an intimate play and this very intimate theatre is perfect for it. Written by Craig Wright, it was the first play produced by The Hub Theatre 10 seasons ago. It was produced at that time by Helen R. Murray, who plays Kari in this production. It is beautifully directed by Kelsey Mesa, who brings to fully-realized life the magical and eternal elements in a deceptively simple set.

This is a play that throws enchantment…

The tension at the core of the play may be the push-pull between Kari (Helen R. Murray) and Peter (Matt Bassett), but the lyrical, inventive heart is the Narrator (Nora Achrati). At times speaking directly to the audience, the Narrator muses on the creation of the universe, the quality of being human, and what foolishness we put ourselves through.

The action takes place at a pavilion outside of a small town where the surviving members of the class of 1998 have gathered for their 20th reunion. Over the course of the evening, secrets are revealed, dreams deferred or losses are mourned, and some face the truth of the paths they took. At the end of the evening, the building is to be burned in a training exercise by the local fire department, preparatory to the eventual construction of a concrete amphitheater.

Kari and Peter were the “cutest couple” in high school and have not seen each other since. When Peter left for college in 1998, he left Kari pregnant. She eventually married another man; Peter has had relationships, but his hazy longing for Kari all these years has prevented him from moving forward. She never moved forward either, and their conversations over the course of the evening, as disjointed as they are, are symbolic of a lifetime of emotions they work through coming to terms with the past and finally acknowledging a future. Both Helen R. Murray and Matt Bassett embody these characters so intimately that at times it almost feels like eavesdropping.

As the Narrator, and all of the other fleeting characters Nora Achrati gift the audience with a tour-de-force performance. Somehow, with just a hand running through her hair or doffing or donning her jacket, she turns into myriad other characters, both male and female, who have quick, momentary interactions with both Peter and Kari. You get the sense that the stage is crowded. She also provides moments of reflective introspection as the Narrator, a being filled with awe at the ever-changing beauty of the world, resignation at the immutable march of time, and an unsentimental and joyous acceptance of humanity’s foibles.

This is a play that throws enchantment—the announcement of different times during the evening (following a reunion itinerary) interspersed with the orbiting of the different characters give a rich sense of movement and time passing. The set design (Kelsey Mesa and Helen R. Murray) helps with this as well—it is a bare stage with a V-shaped dais with railings turned and moved by the actors as the evening progresses. It is whimsically lit with a dangling burst of twinkly lights hung behind and between round paper lanterns of various sizes. It truly gives one the sense of being on a pavilion by a lake.

Surprisingly, for a play that deals with endings and beginnings and a sense of time passing, one leaves feeling lighter, and more kindly towards one’s fellow humans.