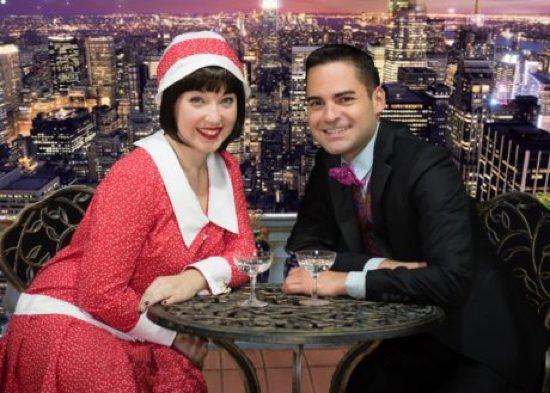 “Thoroughly Modern Millie” opened on Broadway in 2002 and went on to win six Tony Awards, including Best Musical. The show almost instantly became a beloved musical treasure. Songs such as “Gimme Gimme” and “What do I Need With Love” have been performed countless times in showcases, auditions, and cabarets.

The plot follows Millie Dillmount, a small town girl from Kansas who just moved to New York City in 1922. Her goal is to marry her boss, wanting money rather than love. Millie gets caught up in the flapper lifestyle and soon comes face to face with “white slavery.” Young white girls were being kidnapped and sold into sex slavery across Southeast Asia. Millie learns that opening up her heart to love and standing up for her friends is what truly matters. The plot sounds far more dramatic than it is. This is a riotous romp through vaudeville New York.

Millie was enthusiastically played by Evie Korovesis. She has a beautiful voice which did not waver once throughout the performance. This is a strenuous role and she seemed to perform it effortlessly. Her dancing was crisp. Korovesis portrayed Millie with both the naiveté and tenacity that she requires. She sang the iconic numbers “Not for the Life of Me” and “Gimme Gimme.”

Millie runs into Jimmy on her first day in New York and he poses a challenge to her desire to marry Mr. Graydon, her boss. Jimmy was played by Rinaldo Martinez, a bright and sweet actor with a smooth voice. Martinez is energetic and suave. He is able to capture Jimmy’s softer side as well. We see these contrasts in her performance of “What do I Need with Love” and “I Turned a Corner.”

The actor turned hotel owner, Mrs. Meers was played by Kate Keifer. Mrs. Meers has a flair for the dramatic and Keifer brings that with grace and ease. The role suits her well and she performed the showstopping number “They Don’t Know” with great power.

One of the girls that Millie befriends, Miss Dorothy, is a wealthy young lady from California who wants to discover “how the other half lives.”  Holly Kelly performed the role of Miss Dorothy with just the right amount of ditzy quirkiness and pure joy. Her glorious soprano soared during “Ah! Sweet Mystery of Life/I’m Falling in Love with Someone.”

Millie turns to the famous singer Muzzy for advice. She sings the sultry and soulful numbers “Only in New York” and “Long as I’m Here With You.” Muzzy was played by Robin Lynn Reaves who has a strong singing voice and carries a wise dignity with her.

Mrs. Meers employed two men from Hong Kong to do her dirty work for her, Ching Ho and Bun Foo. These adorable characters are played by Don Michael Mendoza and Jarrett Goldfedder. Mendoza captures sweet innocence and Goldfedder is more intense. Both actors make a great team and sing “Muqin” together with Baily like a strong ensemble.

The wealthy bachelor that employs Millie, Trevor Graydon, was performed by Scott Napier. Napier has a smooth voice and a knack for goofy melodrama. He was an adorably serious goofball. He performed one of the more complicated songs “The Speed Test,” which is a wordy number with an especially quick tempo. He is then able to capture the essence of a deeply romantic character in “Ah! Sweet Mystery of Life/I’m Falling in Love with Someone.”

This large ensemble executed the choreography by director and choreographer Duane Monahan with grace. The dance numbers were precise and not overly elaborate. They were concise, technical, and helped progress the story.

The large and complicated set was designed by Maggie Modig. It was very detailed and reflected the art deco style of the time. The desks the ensemble used while in the office were very clever and allowed the dancers to tap while staying seated, typing at their desk.

The fabulous jazz age costumes were designed by Charlotte Marson. They were diverse and reflected multiple styles that were popular in the 1920s.

“Thoroughly Modern Millie” runs through May 12, 2018. For tickets and more information click here.