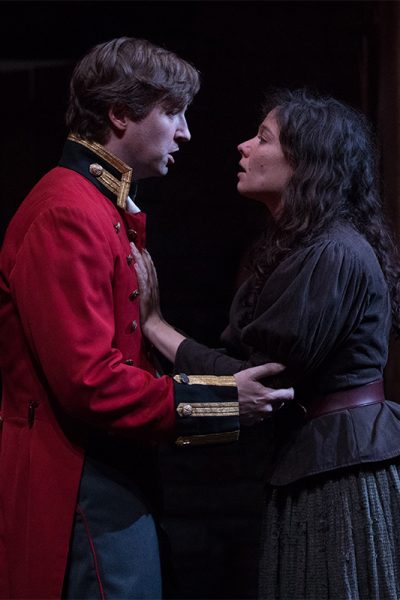 There is one thing that “Translations” excels at—the feeling of helplessness and hopelessness that permeates one’s very existence when one culture cannot speak the dominant culture’s language. This point is hammered home in this Irish play set in the late 1830s by playwright Brian Friel (1929-2015). Along with Stephen Rea, he founded the Field Day Theatre and they staged his “Translations” in 1980.

This is no meeting of equals—a way of being is under siege.

The play concerns the British Royal Engineers coming to what would become Northern Ireland in 1833 to map the country and translate the Irish names into English. It is a play about the clash of language and culture, and how what is basically a conquering army alters the culture of the occupied lands. This is no meeting of equals—a way of being is under siege.

Directed by Matt Torney, the entire production underscores the disparity between the overseers (the English) and the subjugated (the Irish). The action mostly takes place in a dilapidated barn with a dirt floor and little in the way of any comfort (this is where the hedge-school meets). The costumes, designed by Wade LaBoissonnier also builds on this theme; the Irish characters wear patched, drab, faded-from-washing clothing and the uniforms of the Captain and the Lieutenant are clean and crisp and colorful.

The villagers are deftly played by Matthew Aldwin McGee as Manus, Megan Graves as Sarah, Martin Giles as Jimmy Jack, Molly Carden as Maire, Joe Mallon as Doalty, Caroline Dubberly as Bridget, Bradley Armacost as Hugh, and Erin Gann as Owen. The Royal Engineers are portrayed by Jeff Keogh as Captain Lancey and Cary Donaldson as Lieutenant Yolland. The somewhat confusing set is by Debra Booth (some weren’t sure if it was the interior of a house or the exterior of a farmyard; it is the interior of a barn.)

The characters seemed very familiar from other Irish plays, e.g., the nearly mute girl Sarah, the feisty Maire, the drunken Jimmy and his friend Hugh, the angry young man (Manus, who helps run the hedge-school) and the go-between (Owen). The actors certainly threw themselves into the material and at times it did appear as a real village, but at other times one could guess what was coming next. There wasn’t a lot of dramatic tension.

The subplot concerning the growing attraction between Maire and the naïve Lieutenant Yolland worked as a device to underscore the differences between the Irish and the English at the time, although there was one rather lovely moment when Yolland swears to her that he will love her “always,” and she asks what is this always, what does it mean. Their kiss makes the translation apparent, to their mutual delight.

To some extent, the play seemed to lack focus; while the second act seemed to move along much more briskly than the first, there was still a lot of declamation and heavy-handed drunken philosophizing. The ending felt abrupt.

Running Time: About 2-1/2 hours with a 15-minute intermission.