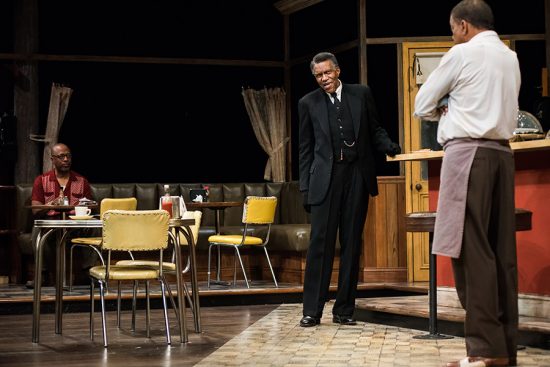 “You got love and you got death. Death will find you. It’s up to you to find love.” — Holloway

This past week marks 50 years since death found Martin Luther King Jr. in Memphis, TN. It also now marks when death found Saheed Vassell in Brooklyn, NY, among other African American women and men. Between the Civil Rights Movement of the 1950-60s and the Black Lives Matter movement of today, has America made any progress? Will this country ever learn from its past, or will it continue to proclaim justice and liberty for all, ignoring any story that tells the whole truth?

With such a talented cast and crew, Arena Stage and Seattle Repertory Theatre’s co-production is a must-see this spring.

Written by Pulitzer Prize- and Tony Award-winning playwright August Wilson, “Two Trains Running” is one of 10 plays that make up the “Pittsburgh Cycle.” Each play examines a different decade in African American life during the 20th century. Set in 1969, “Two Trains Running” follows the world-renowned “Fences” in chronological order; however, this play revolves around a different gathering place in Pittsburgh’s Hill District: Memphis Lee’s diner.

Once bustling with customers, Memphis’ place is next on the list for demolition by the Urban Redevelopment Authority. Wanting not a penny less than $25,000, Memphis sets out to get a proper payout from the city.

Played by Eugene Lee, Memphis is a stubborn, self-reliant man, whose anger is often taken out on others. His dialogue is writ with critiques on what others should have done and impatience with what they didn’t do. It’s not until the end of the storyline, do we finally get a glimpse at a happier Memphis. While Memphis’ story highlights the ramifications of economic decline and gentrification, each character has their own story to tell about confronting racial discrimination in the Steel City.

Risa, a waitress at Memphis’ diner, shows, rather than tells, her pain and struggle. Hoping to avoid or at least minimize harassment, she scars both of her legs. Nicole Lewis does a fabulous job portraying how Risa’s hard personality protects her very emotional core. She’s rarely alone, and the one time she is —dancing to Aretha Franklin on the jukebox — she’s interrupted.

Hambone’s lines are few, but his presence is immediately known. For over nine and half years, he’s visited a white store owner, demanding his ham — what was promised in return for doing a good job painting a fence. Each time he’s shooed away, he turns to the diner in desperation, seeking comfort and agreement about his injustice before returning again the next day. Frank Riley III did a superb job as the mentally ill Hambone. In fact, I found myself often focusing in on Hambone’s background movements, particularly each time he rocked back and forth in his seat, or offered Risa a flower with big, helpless eyes.

David Emerson Toney’s portrayal of Holloway was also captivating. A retired painter turned neighborhood philosopher, Holloway speaks the truth simply and loudly. There’s a matter-of-fact, no-funny-business air to his character that in the end makes him the most humorous of the bunch. For example, throughout the play, Holloway pitches the power of Aunt Esther, a 300-something-year-old spiritual guide. He’s persistent in repeating the way there, knowing his seemingly crazy advice will eventually be taken by those feeling lost or unsure of their path.

West, an undertaker, does what others ask for their loved ones, but always for a price. He’s always discussing the cost of his services, from potential coffin upgrades to time spent, but ought to be the last to complain as he’s the wealthiest of the group. William Hall Jr. does a fabulous job of showcasing the eerie side of the business while maintaining the know-it-all swag of a salesman.

A different type of businessman, Wolf runs numbers for the neighborhood. A self-proclaimed, multi-city player, Wolf tries to win over Risa, but not hard enough. As Wolf, Reginald André Jackson succeeds at showcasing a confident character who understands the rules without constantly focusing on them.

Straight out of jail, Sterling is the most unpredictable, hopeful character. Constantly talking about what he’d like to buy and what job he’d like to have, the only dream he ever attains is Risa’s love. Carlton Byrd is superb as Sterling, particularly in those moments spent trying to gather support for Malcolm X’s birthday rally, or convincing Risa to pay him attention.

From the moment you walk into the Mead Center for American Theater, you feel a part of the story. Seating circles around the stage, making it easy to follow character’s movements while providing the opportunity to see fellow theatergoers’ reactions. From smoke in the kitchen to steam rising off a bowl of beans, Misha Kachman thinks of every set detail to bring Wilson’s play to life. Ivania Stack’s choice of costumes amplify the various personalities on stage, adding another layer of believability. Meanwhile, Sherrice Mojgani’s lighting design provides visual clues to the story that might have otherwise been missed, by spotlighting certain characters in between scene changes.

Washingtonians should hurry to secure tickets to see “Two Trains Running.” With such a talented cast and crew, Arena Stage and Seattle Repertory Theatre’s co-production is a must-see this spring.

Running Time: 2 hours and 30 minutes, with a 15-minute intermission

Advisory: Profanity and racial slurs. This show is recommended for audiences 18 and over.

“Two Trains Running” plays until April 29, 2018, at Arena Stage at the Mead Center for American Theater in Washington, DC. For more information or to purchase tickets, call the theater at (202) 554-9066 or click here.